VIDEO: Watch The Mood In Ghana’s Team Bus Ahead Of Qatar Friendly 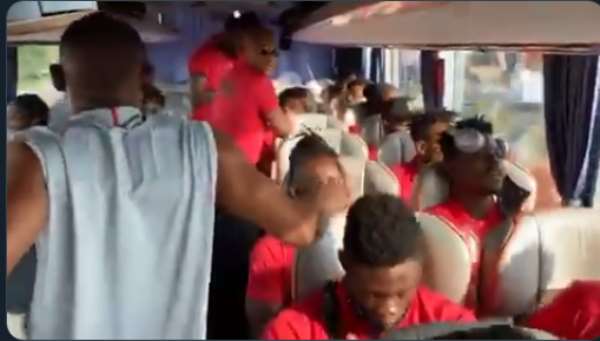 The Black Stars of Ghana have moved from their hotel in Antalya to the Titanic Sports Stadium ahead of kick-off to their game against Qatar this afternoon.

The West African giants are set to come up against the Asian Champions later today for a friendly match in the international break.

With kick-off in less than an hour, the Ghana team appears in high-spirit with a ‘jama’ session initiated in the team bus as they move from their hotel to the stadium.

In a video posted on the Twitter page of the Ghana Football Association (GFA), the playing body of the Black Stars is captured singing and clapping en route to the Titanic Sports Stadium for the Qatar friendly.

The friendly game has been scheduled to kick-off at 15:30GMT.

Security guard jailed 3years for conniving with ex-worker to...
24 minutes ago