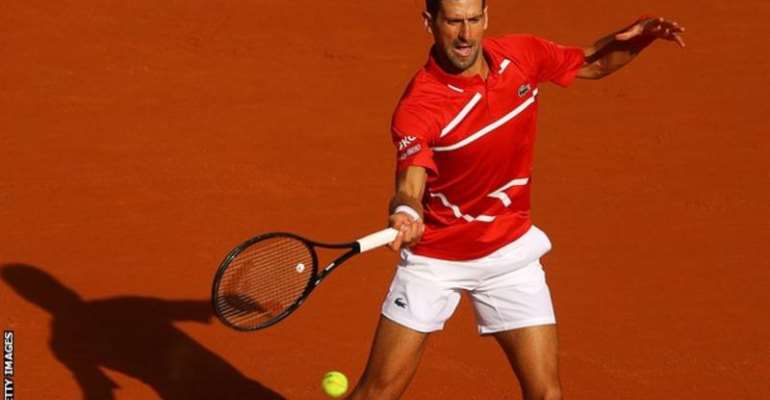 Novak Djokovic has won the French Open once, in 2016

Novak Djokovic continued his dominant start to the French Open with a ruthless straight-set win against Lithuanian world number 66 Ricardas Berankis in the second round.

Djokovic, 33, is one of the favourites to win the tournament and put together an almost flawless performance to triumph in one hour and 23 minutes.

"I felt really good," Djokovic said.
"I hope I can carry on like this."
The top seed has tough competition for the title in Spain's 12-time champion Rafael Nadal and Austria's two-time runner-up Dominic Thiem but he looked focused and in control against Berankis on the Roland Garros clay.

After dropping just five games in his first-round win against Sweden's Mikael Ymer, the Serb continued his bid for an 18th Grand Slam title in equally brutal fashion.

Djokovic broke Berankis's serve in the first game of the match and went on to win the first set in 22 minutes, with the Lithuanian 30-year-old winning just 10 points.

A further two breaks helped Djokovic take the second set and his level continued to rise even higher as Berankis struggled with a back injury.

In total, the world number one served 10 aces, hit 25 winners and won 95% of points on his first serve to claim an easy victory.

"Right from the blocks I want to bring in the intensity," he told Eurosport.

"I managed to do that in the past two matches. It's exactly how I want to roll into the match."

Unbeaten on the court this year, Djokovic's only defeat in 2020 came when he was defaulted from his US Open last-16 match against Spain's Pablo Carreno Busta after hitting a line judge with a ball.