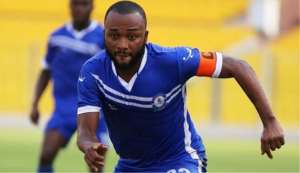 Awako said he missed out on big deals to Tottenham Hotspur and Inter Milan after his FIFA U-20 World Cup exploits due to issues with his agent and visa problems.

Then 18, Awako was one of the most sought-after players in the triumphant Black Satellites team in 2009, but unresolved personal issues undermined his dreams of signing for major European club.

Recounting some of the events leading to his failed pursuit of a dream career in Europe, Awako explained that his Tottenham Hotspur deal fell through due to his inability to secure a UK visa in time to travel to England.

He indicated that he earlier trained with the English side for a while but could not sign a deal because the transfer window had already closed.

“I travelled to London to train with Tottenham but I couldn’t sign because the transfer window was closed so I came back home.

“When the window opened, Harry Redknapp [then Tottenham manager] asked my agent to come with me for pre-season but I failed to secure visa on time and when I got there, the team had left for their pre-season tour”, Awako told the Graphic Sports.

Explaining the circumstances surrounding the failed Inter deal, Awako said the transfer could not materialise because of unexplained disagreements with his agent.

“It was a very bad situation but I had to move on. There was an agent issue but I don’t want to go into what really happened”, he stated.

Awako returned to Ghana’s Heart of Lions where he played for during the 2010-2011 Ghana Premier League season. Subsequently, he moved to Berekum Chelsea and helped the team in their 2011-2012 CAF Champions League campaign.

His impressive performance in the continental campaign secured him a move to DR Congo giants TP Mazembe in a five-year contract.

After his stint with Mazembe, he joined US side Phoenix Rising FC before returning to Ghana to sign for Accra Great Olympics in the 2019-2020 league season which was truncated due to the COVID-19 pandemic.