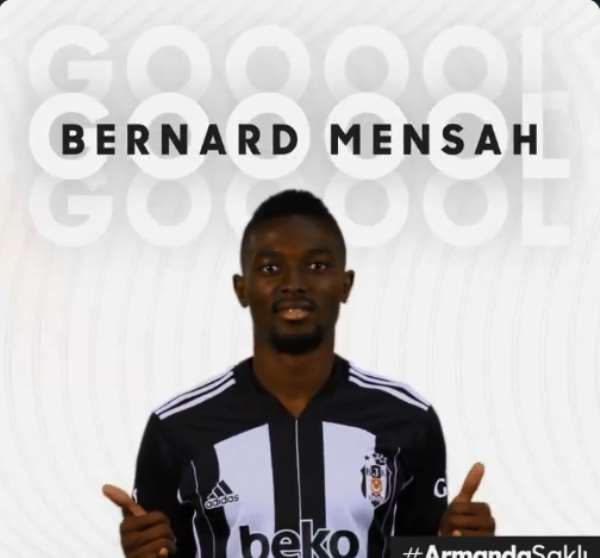 Midfielder Bernard Mensah registered his name on the scoresheet on Sunday evening during his league debut for Besiktas as they defeated Trabzonspor 3-1 on the road.

The Ghana international joined the Turkish outfit in August on loan from Kayserispor in a deal that has the potential of being made permanent at the end of the season.

On the opening weekend of the 2020/2021 Turkish Super League season on Sunday, Bernard Mensah was named in the starting line-up of Besiktas by his manager Sergen Yalcin.

The midfielder had an outstanding game and proved his worth to help his team bag all 3 points at the end of the 90 minutes at the Senol Gunes Akyazi Stadyumu.

First, Tyler Boyd handed the visitors the lead on the 29th minute to take into the break before Bernard Mensah doubled the lead for the Black Eagles on the 64th minute from the penalty spot.

Ten minutes later, Jeremain Lens also registered his name on the scoresheet after he was assisted by Dorukhan Tokoz, ultimately dragging the game beyond the reach of Trabzonspor who later netted a consolation goal through Abdulkadir Omur.

Bernard Mensah, 25, played 81 minutes of the 3-1 win before he was replaced by Adem Ljajić.