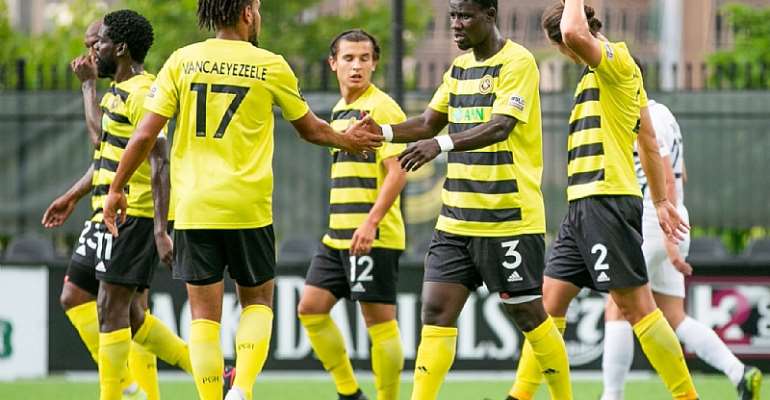 Ghanaian youngster, Ropapa Mensah was on target on Saturday when his Pittsburgh Riverhounds SC side drew 2-2 against Saint Louis FC in the USL Championship.

The forward was in action for his team when they hosted their Matchday 10 opponent at the Highmark Stadium to fight for the available 3 points.

Having dominated play in the early parts of the first half, Pittsburgh Riverhounds SC netted the opening goal on the 16th minute through a fine finish from striker Ropapa Mensah.

The home team built on that lead and managed to score again with 5 minutes to end the first half. This time around, it was winger Robbie Mertz who registered his name on the scoresheet.

With a good response after conceding the second goal, Kyle Greig scored in added time of the first half to reduce the deficit for Saint Louis FC.

The team returned from the break with the momentum and went on to draw level on the 57th minute courtesy a strike from Wal Fall.

Despite both teams pushing for a winning goal, they had to settle for a draw at the end of the 90 minutes.

Ghana’s Ropapa Mensah lasted 86 minutes of play before his place was taken by Lukas Fernandes. The 23-year old striker has 3 goals and 2 assists after featuring in 9 games for Pittsburgh Riverhounds in the USL Championship this season.