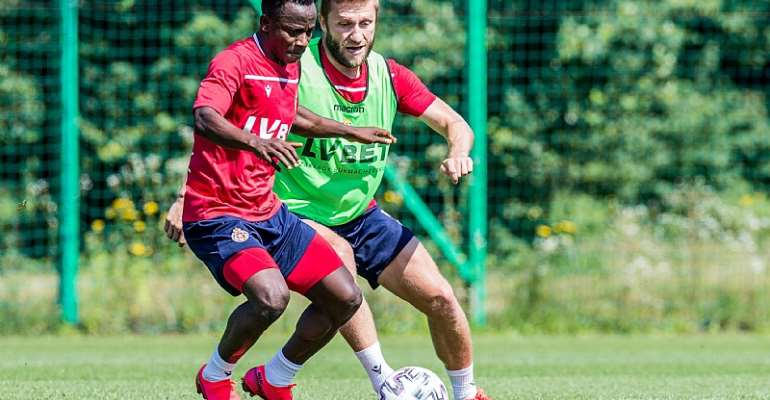 Ghanaian forward, Yaw Yeboah has commenced training at his new club, Wisla Krakow as the team continues preparation for the next football season.

The attacker who captained the Ghana U-23 team at the 2019 U-23 Africa Cup of Nations tournament in Egypt sealed a transfer to the Polish outfit on Tuesday in a deal that saw him moving from Spanish Club CD Numancia.

A club statement from Wisla Krakow to confirm the signing of the winger yesterday said: “23-year-old Ghanaian winger Yaw Yeboah is another player who joined the team of the 13-time Polish champion. The contract binding the rider with the White Star will be in force for three years”.

Today, the 23-year old has had his first training with his new teammates as he looks forward to convincing the technical handlers of the team of why he deserves a starting role in the team.

Yaw Yeboah formerly played for English Premier League giants Manchester City as a youth player before going on to have stints with teams such as FC Twente, Lille, and Real Oviedo.

He is hoping to step up his game at Wisla Krakow to prove his quality amongst the best players in the game.