Dogboe Thanks Ghanaians For Support After Comeback Victory 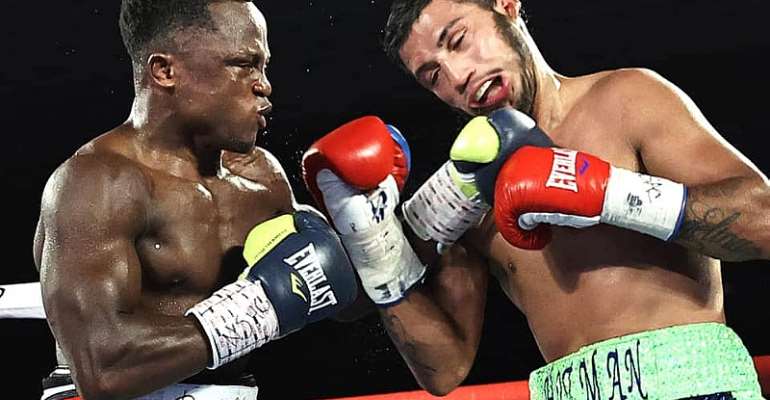 Isaac Dogboe has thanked Ghanaians for the massive support he received in his comeback after losing twice to tough Mexican Emmanuel Navarrette.

He was in good shape on Tuesday night to defeat American with Mexican lineage, Chris Avalos by a TKO in the last minute of the eight-rounder.

14 months of no fight have been rough and trying for the former WBO Super bantamweight world champion, Isaac Dogboe, but he came out very carefully and delivered the victory.

Dogboe’s reputation was dealt a huge blow, after losing back to back world title bouts against Mexican, Emmanuel Navarette, but he is on the recovery trail and promises to gain another title belt.

The 25-year-old former Olympian made a glorious return, after a 14-month absence, on Wednesday morning, registering an 8th round TKO win against American, Chris Avalos, in a one-sided encounter at the MGM Grand in Las Vegas.

The former world champion took to his official Twitter page after the bout, to pay tribute to the support he received from Ghanaians during his difficult period.

Some boxing experts in Ghana commended his effort in winning against another taller opponent.

Ataa Eddie Pappoe, an experience international boxing referee/ judge said he must take his time and come into the fight like a wounded lion, which he did.

National boxing coach Dr Ofori Asare said the right opponent was picked for him, and he really listened to his corner, which contributed to the victory.

Coach Eben Adjei, one of the hard-working trainers in Accra wished him success, and it was achieved. He said Dogboe is no doubt a very good boxer, and if he always listens to his coaches, he will win all his bouts.

Prince Dornu- Leiku, a boxing writer noted that the win was very important in his career as it would encourage him to fight better, and possibly win the world featherweight title.

Elizabeth Alhassan, a rising sports journalist expressed her joy and prayed that he would never lose again. She wished him more success in all his fights.

Officials at the Ghana Boxing Authority (GBA) are also elated and prayed for more victories.