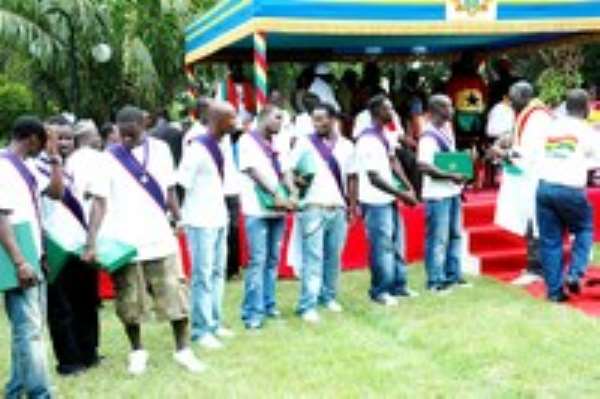 The President John Agyekum Kufuor yesterday, bestowed Grand Medals of national honours on members of the national team, the Black Stars and the technical team for their vintage performance at the 2006 FIFA World Cup soccer fiesta.

The skipper of the Stars, Stephen Appiah received the first Grand Medal of “Order of the Volta” from the President at the Castle, Osu in Accra when the team called on him.

President Kufuor in a short address said Government was according the players the honour for the achievement they chalked for Ghana and that their performance cannot be put into money value. He said members of the Black Stars and their technical handlers are being welcomed home as concrete heroes in recognition of their performance and to be given national honours.

The President of the Ghana Football Association, Kwesi Nyantakyi, Fred Pappoe, Randy Abbey and Oheneba Charles were among some of the members of the technical team to receive the wards from the President.

The Black Stars were the only team from the African continent to progress to the 1/16th stage of the 2006 World Cup in Germany when they lost by an unbelievable 3-0 to defending World champions, Brazil.

The team from the Castle went on a state ride through some principal streets of Accra adorned in their national honours amidst lively brass band and gospel music to the cheers of enthusiastic crowd along the streets.

NPP Youth Wing commends Akufo-Addo on nomination of Dorcas A...
22 minutes ago