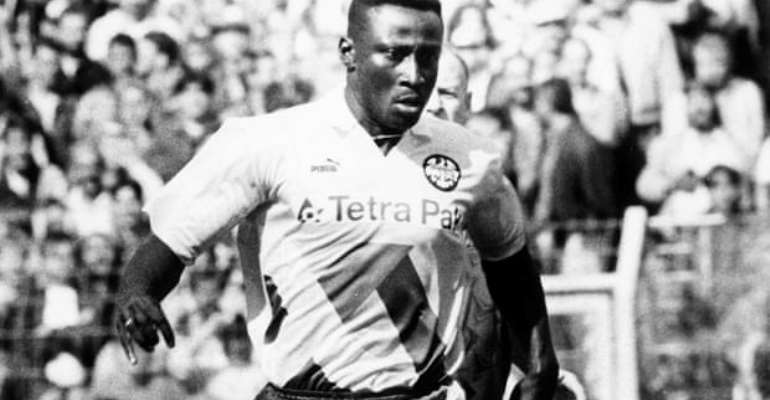 JÃ¼rgen Klopp: 'Tony Yeboah was one of the greatest strikers who played in Germany apart from Gerd MuÌˆller.' Photograph: Ullstein Bild/Getty Images

“I love the fact that we have so many African players … until the Africa Cup of Nations starts. Then it’s: ‘Oh my God!’” says Jürgen Klopp, breaking into his famous guffaw.

Six weeks to the day since Liverpool’s victory over Tottenham in the Champions League ended his personal run of six straight defeats in major finals, Klopp is in his office at the club’s Melwood training ground. For once, though, as he leans back on the sofa loading up a new vape, the former striker turned central defender, who has become one of football’s most famous personalities, seems to be only half-joking.

“It’s still better than it used to be because before they were out in the middle of the season,” he adds. “In the past because the Africa Cup of Nations was in the winter it was really a reason not to sign an African player because you would lose him for four weeks in the middle of the season. That was really something we had in our minds always.”

In purchasing Sadio Mané, Mohamed Salah and Naby Keïta in successive summers between 2016 and 2018, Liverpool broke the African transfer record three times. It has certainly paid dividends. Although Keïta – the Guinea midfielder who was handed Steven Gerrard’s famous No 8 shirt when he moved from RB Leipzig in June 2018 for almost £53m – struggled with injuries in his debut season, the goalscoring exploits of Senegal’s Mané and Salah of Egypt helped transform Liverpool from Premier League also-rans into European champions.

Mo Salah and Sadio Mané have been pivotal in Liverpool’s rise to the top of the European game. Photograph: Paul Greenwood/BPI/Shutterstock

Klopp’s views on the new scheduling of Africa’s biennial tournament would be put to the test a few days later when Mané’s Senegal side contested the final against Algeria in Cairo – his 55th game of an exhausting but prolific season – only two weeks before the Community Shield against Manchester City. The decision to move the 2021 tournament in Cameroon back to January would later test his patience even further, although the man who spent most of his own playing career at Mainz in the German second division before becoming one of the world’s best managers can claim to have played a special role in the story of African players in English football.

Klopp admits he has been fascinated by the continent ever since he watched a bulldozing striker from Ghana make his name with Saarbrücken in the late 1980s. Anthony Yeboah, as Klopp and most of Germany still refer to him, was part of Eintracht Frankfurt’s exciting young team that were pipped to the Bundesliga title by Stuttgart in 1992, with the striker finishing as the league’s top scorer for the following two seasons.

“Yeboah was one of the greatest strikers who played in Germany apart from Gerd Müller. He had a big impact on society,” enthuses Liverpool’s manager, who also remembers some of the abuse one of the country’s first black players had to endure. “In football we never thought about racism. If some idiots were shouting something, you realised it but you were saying: ‘Are you mad? What are you doing?’ There wasn’t social media so it didn’t get the awareness of today.

“It was usually a single person and if he did it, he would get a slap and go home. He wouldn’t do it again. But now, of course, it becomes more – there are more people – and the story becomes bigger and bigger through the reaction. It’s a shame that we are still talking about things like this but that’s how society is.”

In 2014, a wall painting of Yeboah was unveiled on the side of a house in Frankfurt near Eintracht’s stadium with the message in German: “We are ashamed of everybody who screams against us.” It was taken from an open letter the Ghana international had written 24 years earlier, also signed by fellow professionals Anthony Baffoe and Souleyman Sané, the father of the future Manchester City forward Leroy, to protest against racism.

Yeboah would later follow in the footsteps of Albert Johanneson, the South African who became the first black player to appear in the FA Cup final 30 years earlier, when he signed for Leeds in 1995. Klopp also admits to a soft spot for Jay Jay Okocha – another African who would go on to make a name for himself in English football, with Bolton, after first starring in the Bundesliga.

“He scored the most spectacular goal in the history of German football,” he remembers of Okocha’s brilliant individual strike for Eintracht against Karlsruhe in 1993 that the goalkeeping legend Oliver Kahn joked in 2016 still left him “feeling dizzy”. “It took like five minutes of Kahn and his defenders diving on the floor before he put the ball in the net! Some of the world’s best players have been from Africa. George Weah. Didier Drogba. Yaya Touré. In their generation they were some of the best players so why should we not sign them? It’s great.”

The Liverpool side that defeated Spurs in Madrid contained their natural successors in Mané and Salah. Even with Keïta sidelined due to an injury he sustained in the semi-final against Barcelona before the famous comeback in the second leg, the presence of the defender Joël Matip – born in Germany to a Cameroonian father – in his starting lineup certainly underlined Klopp’s appreciation of players with African heritage.

And then there was Divock Origi. The striker scored the second goal in the final against Tottenham to complete a fairytale story that had seen him almost leave the club the previous summer. Almost 30 years earlier, Origi’s father, Mike Okoth, arrived in Belgium from Kenya to pursue his dream to play in Europe. By coincidence, that was where Klopp’s wife had spent three years working as a teacher.

“We are quite … as a family. I’m … my wife worked and lived in Africa,” he explains, stuttering slightly. “In Kenya. In a German school. Our elder son lived there for a couple of years so they are really interested in Africa. She was a teacher. She helped me to understand some of the culture.”

Klopp first met Ulla Sandrock while she was working as a waitress at Oktoberfest in 2005, having moved back to Mainz from Kenya. Both had children from previous marriages and they were married within months.

“In Nairobi, I had a completely free hand in education,” Ulla told the German magazine Der Spiegel in 2008. “In Mainz, I first worked as a teacher at a special school, but immediately noticed: ‘I can no longer make friends with the old-established methods.’ Everything has certain rules to follow; that drives me crazy. I’m like my husband. We ‘Kloppos’ need our freedoms to realise our potential.”

Having left teaching to pursue a career as a children’s author, her first book – Tom and the Magic Football, in 2008 – told the story of “the fascination of the game, the longing for a distant heroic world, the common thrill and, above all, the sense of security that the child feels through the attention of the parents”. Or, as Klopp, who wrote the foreword, puts it: “It’s like Harry Potter but it’s about football. There’s no Harry Potter flying on his fucking stick – just football.”

A year later, the sequel, Tom and the Magic Football in Africa was published, in which the eponymous hero and his friends travel to Africa to help save his friend Mucawe’s village on Lake Malawi from demolition by a Western industrialist who wants to build a hotel complex. Drawing heavily on Ulla’s own experiences of life in Kenya, it is a parable of fighting against the odds that her husband believes still applies to many of today’s African players.

“What you cannot get any more is a special story which, in the good old times … he came from a working family, had nothing,” he says. “In Europe it’s difficult to find that – maybe in London it’s possible, I’m not too sure. But all the African players have this story. It means they are motivated through the roof.

“It’s about the story that is behind them,” adds Klopp enthusiastically. “If you look at Sadio Mané – running away from home. Mo Salah: driving four and a half hours every day to training. You have these stories there. You don’t have these stories here. I read an article about the influence of Mo Salah at this moment in the Arabic world – it’s unbelievable!”