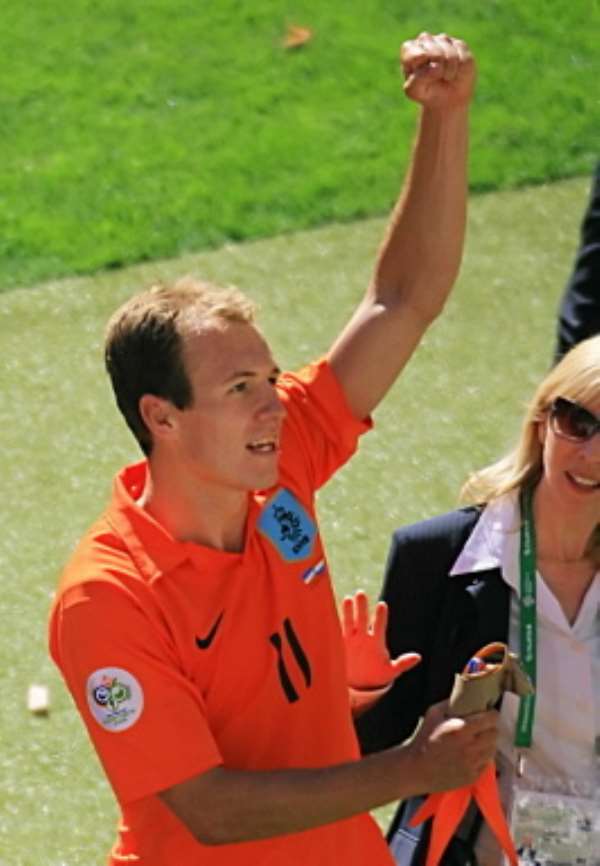 A first-half goal from Arjen Robben was enough to earn the Netherlands a 1-0 win over Serbia and Montenegro in their opening match of the 2006 FIFA World Cup™ in Leipzig on Sunday, 11 June 2006.
Robben struck the only goal of an absorbing contest in the 18th minute, finishing confidently after his speed carried him clear of the Serbia and Montenegro back line. The victory puts Marco van Basten's Dutch team level on three points with Argentina at the top of Group C.

2': A lively opening from the Netherlands and a half-chance for Arjen Robben, but his looping back-header was grabbed from under the crossbar by Dragoslav Jevric.

6': With the backing of terrific support from the Oranje fans on a warm afternoon in Leipzig the Netherlands did the early pressing, albeit without making any real inroads against the famously tight Plavi defence.

10': A foul ten yards from the right-hand edge of the Netherlands penalty area brought a free-kick for Serbia and Montenegro. But a curling effort from Savo Milosevic was saved comfortably by Edwin van der Sar.

13': A chance for Serbia and Montenegro but Milosevic and Dejan Stankovic got in each other's way.

21': Another chance for the lively Robben, this time a left-footed drive from some 20 yards which was palmed away by Jevric.

29': After being rocked by the goal, Serbia and Montenegro settled and Mateja Kezman went close with a header from the edge of the six-yard box.

36': Robben, a constant threat, cut in from the left and shot just wide of Jevric's left-hand post with a curling effort from the edge of the penalty area.

45': Serbia and Montenegro showed they were still in the game as Van der Sar stretched to catch a dangerous left-wing cross, and Ognjen Koroman was then inches wide with a powerful shot from the edge of the penalty area with Van der Sar well beaten.

Second half under way

46': Early pressure from Serbia and Montenegro brought a left-wing corner but the Netherlands scrambled the ball clear.

54': The first real chance of the second period came at the other end from a well-worked free-kick. Wesley Sneijder put the ball into the box but Robben missed with an attempted overhead kick when unmarked ten yards out.

60': Sneijder's shot from 17 yards was blocked close to goal and Jevric just got to the loose ball ahead of Ruud van Nistelrooij.

71': Serbia and Montenegro enjoyed a spell of possession and nearly drew level with a low shot from Koroman, which Van der Sar saves with his knees.

74': The Dutch were struggled to break Serbia and Montenegro's stranglehold on the game. Substitute Nikola Zigic was not far away when stretching for a left-wing cross inside the Netherlands penalty area.

81': Some respite for the Netherlands defence as the Dutch win a free-kick by the left-hand edge of the Serbia and Montenegro penalty area. A low drive from Van Persie whistled through the box untouched and went just wide.

88': A chance for a second goal for Robben but his low left-footed shot from 16 yards missed by a whisker.

In conclusion:
Serbia and Montenegro fought all the way but the Dutch did enough to secure a narrow and important win in this keenly contested game. Marco van Basten can celebrate his first victory in a FIFA World Cup™ game, either as a player or coach. The Oranje can look ahead with confidence to facing Côte d'Ivoire on Friday while Serbia and Montenegro next face another daunting assigment against Argentina.