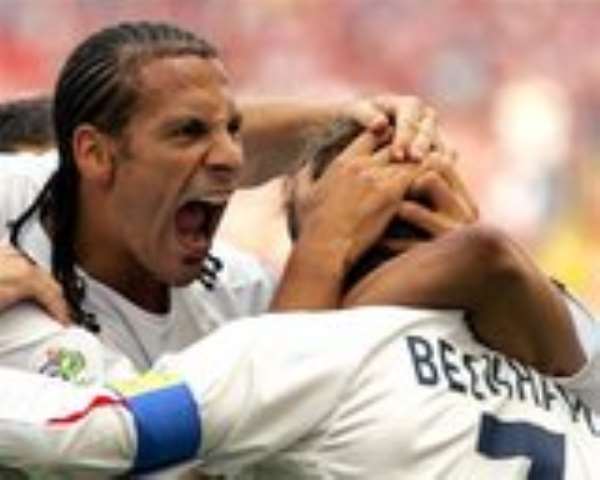 England got their FIFA World Cup™ campaign off to a winning start in Frankfurt with a hard-fought 1-0 win over Paraguay on Saturday, 11 June 2006.
However, they did not have their own way against the South Americans, who gave Sven-Goran Eriksson's men some nervous moments during the 90 minutes.

The only goal of the game came in the third minute when David Beckham's free-kick skimmed off the head of Carlos Gamarra and into the net.

Paraguay pushed for an equaliser in the second half, but despite their best efforts, a goal was not forthcoming and most now turn their attentions to their next Group B game against Sweden in Berlin next Thursday.

The match:
3': England took an early lead, courtesy of an own goal by Carlos Gamarra. David Beckham curled in a free-kick from the left flank and the Paraguay captain inadvertently flicked the ball into the net with his head, beating the despairing dive of goalkeeper Justo Villar (1-0).

8': Villar's unhappy start to the tournament was compounded when he raced out to clear an England attack, but in kicking the ball away from Michael Owen he injured himself and Aldo Bobadilla came off the bench to replace him in goal.

10': Liverpool midfielder Steven Gerrard, passed fit for the match after struggling with a hip injury in the build-up, tried his luck with a right-footed volley but the effort flashed over.

13': Bobadilla conceded an indirect free-kick on the edge of his area but Frank Lampard failed to make the most of the chance.
17': Carlos Paredes tried to inject some life into Paraguay with a drive from 20 yards, but it passed harmlessly wide of England goalkeeper Paul Robinson's post.

19': Cristian Riveros had a shot on target for Paraguay, but Robinson dived low to his left to smother it well. Gerrard picked up the game's first yellow card for the challenge he made in trying to close Riveros down.

22': Lampard played a neat one-two with Crouch and forced Bobadilla into a save with a fierce drive.

43': After a relatively quiet passage of the game, Beckham tried to find his range from open play with a curling shot from 18 metres, but it flashed just past the post and out for a goal kick.

47+': Nelson Valdez had Paraguay's best chance of the first half in stoppage time after picking up a loose ball inside the penalty area and firing in a right-foot shot, although he failed to hit the target. 53': The second half began at a much slower pace, with the heat in Frankfurt having taken its toll on the players. Roberto Acuna tried to catch the England defence off-guard with a quick free-kick for , but it rolled through to Robinson without troubling him at all.

58': Joe Cole brought Bobadilla into action with a low drive, but the Paraguayan was equal to it with a smart stop.

59': An anxious moment came for Robinson when he failed to gather Carlos Bonet's cross at the first attempt. Paredes tried to hook the ball over the onrushing keeper but could not keep the ball down.
64': Valdez turned inside Gerrard and sent in a decent shot with his left foot, but the effort went straight into Robinson's arms. The Tottenham keeper brought a collective smile to the crowd when his towering clearance bounced back off the giant video screen hanging over the centre circle in Frankfurt.

73': With England struggling to find the rhythm they managed in the early part of the game, Lampard injected some dynamism back into their play with a stinging attempt which brought the best out of Bobadilla, who palmed the ball over the bar.

88': Lampard once again tested Bobadilla with a powerful shot, but the Paraguay keeper denied him by tipping the ball round the post for a corner.

In conclusion:
England got the opening win they were looking for, but the performance in the second half was less than convincing. Paraguay can take heart from their battling display, though they had no reward for their efforts.