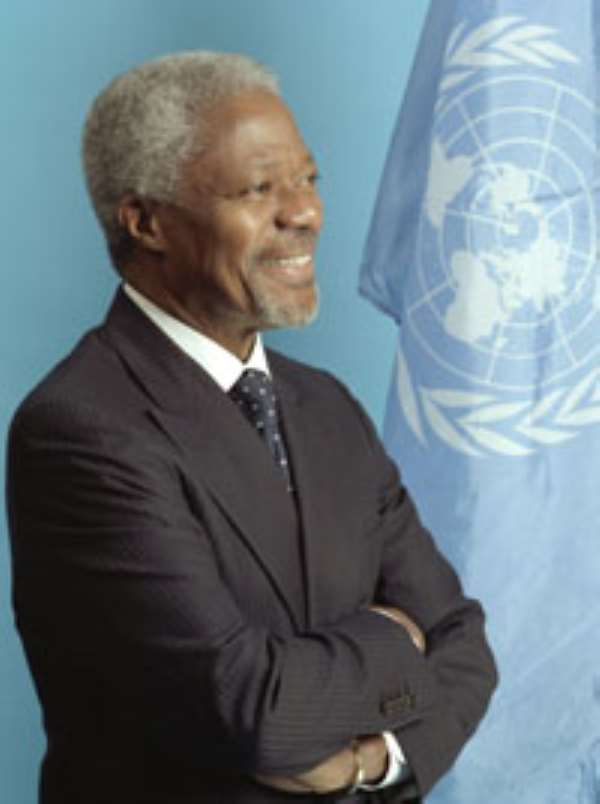 Kofi Annan of Ghana is the seventh Secretary-General of the United Nations. The first Secretary-General to be elected from the ranks of United Nations staff, he began his first term on 1 January 1997. On 29 June 2001, acting on a recommendation by the Security Council, the General Assembly appointed him by acclamation to a second term of office, beginning on 1 January 2002 and ending on 31 December 2006.

Mr. Annan's priorities as Secretary-General have been to revitalize the United Nations through a comprehensive programme of reform; to strengthen the Organization's traditional work in the areas of development and the maintenance of international peace and security; to encourage and advocate human rights, the rule of law and the universal values of equality, tolerance and human dignity found in the United Nations Charter; and to restore public confidence in the Organization by reaching out to new partners and, in his words, by "bringing the United Nations closer to the people".

Mr. Annan was born in Kumasi, Ghana, on 8 April 1938. He studied at the University of Science and Technology in Kumasi and completed his undergraduate work in economics at Macalester College in St. Paul, Minnesota, U.S.A., in 1961. From 1961 to 1962, he undertook graduate studies in economics at the Institut universitaire des hautes études internationales in Geneva. As a 1971-1972 Sloan Fellow at the Massachusetts Institute of Technology, Mr. Annan received a Master of Science degree in management.

Mr. Annan joined the United Nations system in 1962 as an administrative and budget officer with the World Health Organization (WHO) in Geneva. Since then, he has served with the UN Economic Commission for Africa (ECA) in Addis Ababa; the United Nations Emergency Force (UNEF II) in Ismailia; the Office of the United Nations High Commissioner for Refugees (UNHCR) in Geneva; and, at UN Headquarters in New York, as Assistant Secretary-General for Human Resources Management and Security Coordinator for the UN System (1987-1990) and Assistant Secretary-General for Programme Planning, Budget and Finance, and Controller (1990-1992).

In 1990, following the invasion of Kuwait by Iraq, Mr. Annan was asked by the Secretary-General, as a special assignment, to facilitate the repatriation of more than 900 international staff and citizens of Western countries from Iraq. He subsequently led the first United Nations team negotiating with Iraq on the sale of oil to fund purchases of humanitarian aid.

Before being appointed Secretary-General, Mr. Annan served as Assistant Secretary-General for Peacekeeping Operations (March 1992-February 1993) and then as Under-Secretary-General (March 1993-December 1996). His tenure as
Under-Secretary-General coincided with unprecedented growth in the size and scope of United Nations peacekeeping operations, with a total deployment, at its peak in 1995, of almost 70,000 military and civilian personnel from 77 countries. From November 1995 to March 1996, following the Dayton Peace Agreement that ended the war in Bosnia and Herzegovina, Mr. Annan served as Special Representative of the Secretary-General to the former Yugoslavia, overseeing the
transition in Bosnia and Herzegovina from the United Nations Protection Force (UNPROFOR) to the multinational Implementation Force (IFOR) led by the North Atlantic Treaty Organization (NATO).

As Secretary-General, Mr. Annan's first major initiative was his plan for reform, "Renewing the United Nations", which was presented to the Member States in July 1997 and has been pursued ever since with an emphasis on improving
coherence and coordination. His April 1998 report to the Security Council on "The Causes of Conflict and the Promotion of Durable Peace and Sustainable Development in Africa" was among several efforts to maintain the international community's commitment to Africa, the most disadvantaged of the world's regions.

He has used his good offices in several delicate political situations. These included an attempt in 1998 to gain Iraq's compliance with Security Council resolutions; a mission in 1998 to help promote the transition to civilian rule in
Nigeria; an agreement in 1999 to resolve a stalemate between Libya and the Security Council over the 1988 Lockerbie bombing; diplomacy in 1999 to forge an international response to violence in East Timor; the certification of Israel's
withdrawal from Lebanon in September 2000, and further efforts, since the renewed outbreak of violence in September 2000, to encourage Israelis and Palestinians to resolve their differences through peaceful negotiations based on Security Council resolutions 242 and 338 and the principle of "land for peace".

Mr. Annan has also sought to improve the status of women in the Secretariat and to build closer partnerships with civil society, the private sector and other non-State actors whose strengths complement those of the United Nations; in
particular, he has called for a "Global Compact" involving leaders of the world business community as well as labour and civil society organizations, aimed at enabling all the world's people to share the benefits of globalization and embedding the global market in values and practices that are fundamental to meeting socio-economic needs.

In April 2000, he issued a Millennium Report, entitled "We the Peoples: The Role of the United Nations in the 21st Century", calling on Member States to commit themselves to an action plan for ending poverty and inequality, improving
education, reducing HIV/AIDS, safeguarding the environment and protecting peoples from deadly conflict and violence. The Report formed the basis of the Millennium Declaration adopted by Heads of State and Government at the Millennium Summit, held at UN Headquarters in September 2000..

In April 2001, the Secretary-General issued a five-point "Call to Action" to address the HIV/AIDS epidemic -- which he described as his "personal priority" -- and proposed the establishment of a Global AIDS and Health Fund to serve as a
mechanism for some of the increased spending needed to help developing countries confront the crisis.

On 10 December 2001, the Secretary-General and the United Nations received the Nobel Peace Prize. In conferring the Prize, the Nobel Committee said Mr. Annan “had been pre-eminent in bringing new life to the Organization”. In also conferring the Prize on the world body, the Committee said that it wished “to proclaim that the only negotiable road to global peace and cooperation goes by way of the United Nations”.

The Secretary-General is fluent in English, French and several African languages. He is married to Nane Annan, of Sweden, a lawyer and artist who has a great interest in understanding the work of the United Nations in the field. Two issues of particular concern to her are HIV/AIDS and education for women. She has also written a book for children about the United Nations. Mr. and Mrs. Annan have three children.

This is what Akufo-Addo and US Vice President Kamala Harris ...
50 minutes ago