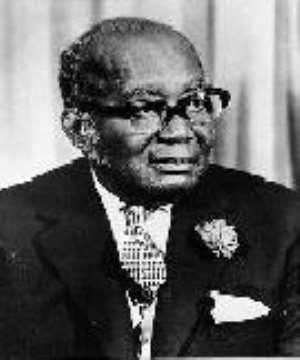 Edward Akuffo -Addo was born on 26 June 1906 to Williarn Martin Addo-Danquah and Tboedora Amuafi. He was educated at Achimota College, He was a hard working student and won scholarship to St. Peter's College, Oxford University, in the United Kingdom where he read Mathematics, Politics and Philosophy.

Whilst in the United Kingdom, He was called to the Middle Temple Bar in London. In 1941 he returned to the Gold Coast and started private legal practice but was soon caught up in politics. In 1947 he was a founding Member of the United Gold Coast Convention (UGCC) and was detained as one of the "Big Six" after disturbances in Accra in 1948. A year Later he became a member of the Gold Coast Legislative Council and the Coussey Constitutional Commission .

From 1962 to1964 he was supreme Court Judge ( One of three Judges who sat on Treason trial involving Tawiah Adamafio, Aku Adjei and three other after the Kulungugu bomb attack on Nkrumah and was dismissed with fellow judges for finding some of the accused not guilty. He was appointed Chief justice in NLC regime from 1966 to 1970 and became chairman of the Constitutional Commission (Commission that drafted the 1969 Second Republican Constitution). from 1966 to 1968, also at that same period he was head of the NLC Political Commission.

He became president of Ghana in the Second Republic from1970 to1972 ( Akufo-Addo was a ceremonial President and had no executive powers as all powers lay with the Prime Minister, Dr. Kori Abrefa Busia) Akufo-Addo was married to Adeline Yeboakwa Akufo-Addo. He died on 17 July 1979 of natural causes.