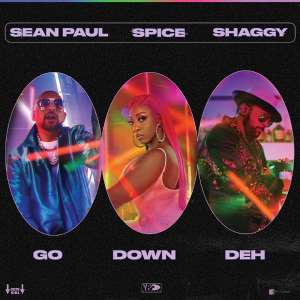 Trending globally across various streaming platforms, the song has garnered enough positive reviews and become one of the most played hit single in Africa since its release in April.

The song is coming off her highly anticipated debut album, titled TEN, slated for release on July 30.

Produced by Grammy Award nominee, Costi Ionita and Shaggy and written by Spice, Sean Paul, Shaggy, Costi and Shane Hoosong, “Go Down Deh” - the rhythmically pulsating song for the first time, saw a collaboration between the iconic and celebrated Jamaican trio.

Spice revealed her excitement working with the featured stars who she described as "Legends".

“Working with Sean and Shaggy is one of the biggest milestones of my career! They are both International giants in our genre and I’m honored to have created such a historic moment by being one of the first artists to have them collaborate on a track together”, she said.

Shaggy while also commenting on the collaboration said: “Spice is a powerhouse! She’s respected and celebrated throughout our culture and stands as an icon in the game of dancehall.” He adds, “From day one, Sean has been someone I’ve admired with his signature style and a voice that makes anything sound great. The track that we’ve created showcases their artistry while highlighting the chemistry between us as artists.”

“Working on this single with Shaggy & Spice was a great vibe,” adds Sean Paul.” “Shaggy and I have a great relationship and I've been a fan of Spice’s throughout her career, so I’m happy to work with her. Looking forward to everyone hearing this track and the amazing work Spice has been putting in for her upcoming project.”

A director at Prime Music Partners expressed satisfaction on the impressions the song has had across nations even down to African countries.

"Good music is a therapy for the soul. Spice really came through with this one and am glad especially for the uniqueness and steady impact its making in Africa and other continents around the world".

The singer is currently Signed to VP Records, one of the world’s largest reggae and Caribbean record label, and a major contributor to the globalization of reggae and dancehall culture.

She has received the YVA Award for Female Artist of the Year 7 consecutive times, and nominated for the UK’s coveted MOBO Award. The new song will further strengthen her spot at the top of the music scene.

N/R: Over 300 suspected criminals arrested in military opera...
11 minutes ago