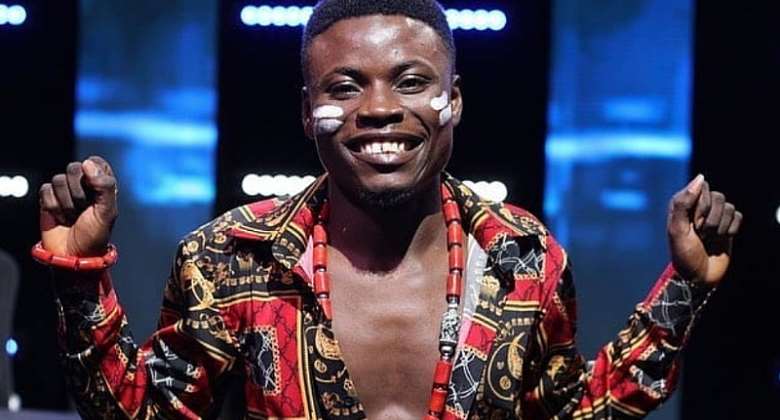 I was shocked when Nengi started following me - Kingdom

From his first day at the Nigerian Idol auditions, 24-year-old Kingdom Kroseide grabbed the attention of fans following his moving rendition of Whitney Houston’s ‘I Look To You’. Accompanying his vocals with the piano, Kingdom brought judge Seyi Shay to tears, and since then, the Sagbama, Bayelsa state-born singer has remained unstoppable.

In an exclusive chat, Kingdom shares his journey to Nigerian Idol, currently streaming on Showmax, his thoughts on the positive feedback from celebrities and non-celebs alike, and what the future holds.

What does it feel like to get so much positive feedback from celebrities and fans?

I really prayed before coming for this show. Singing is something I normally do and get accolades for. But so far with what I’ve experienced from the first day when I auditioned and Seyi Shay cried, I know it’s not just me who’s singing that this lady is crying for. Then when I started seeing the comments and posts - Nengi even followed me, I was shocked. I thank God for everything, that’s what I would say.

What were you doing prior to getting on the show?

I’m a computer science student at Federal University Otuoke, Bayelsa but I was also singing. I teach music, I love to teach music. I’m also one of those people who would like to study music when I’m done with the competition. There’s this group I have, Pretty Simple Harmony, I love combined music so the group is kind of a choir, though not entirely.

Had you auditioned on any other show before Nigerian Idol?

I need a fan base, I need people to understand that I know what I’m doing and really love it so they can connect with it and give me feedback. So when I came to school, I did this competition called the Levites, I ended up being the first runner up. Then for my state level (Bayelsa), I did a competition called I Sabi Sing, which I won, and then I went for another one called Live Your Dream - and I didn’t even pass through the auditions. But then I did an Uyo Meyo cover that went viral. I just feel God prepared me for this particular position because I can remember praying for this time, not just praying but also the preparations. That’s why when I perform these days and it’s not good, I listen to the crowd to determine what they want. What are they complaining about? And that’s how I up the game.

Why did you decide to audition for Nigerian Idol?

I’ve always had this mentality that each time I teach or sing music, people see me as someone who has something special to share. So I thought, why not have a platform where I can showcase what I do so people will be able to relate with it and come to me through that.

Did you think you would make it this far in the competition?

Kind of. I don’t hide the fact that I’m a church boy and I will always attribute everything to God. This was the first year I made a New Year's resolution. I don’t usually understand how it works but this year I decided to put my mind on what God wants me to do and I prayed, and got into this competition. Also at the beginning of the year, my church organised this fasting and prayer activity so I believe I was directed to come here and do everything that I did. When I got on the competition I was even scared because I saw some fan bases and people with their style of doing things. I was actually the person with the smallest followers, but today I’m so thankful for how far I’ve come.

Who have you bonded with the most?
Emmanuel. I bonded with others too in different ways but Emmanuel is the one that we talked and had an understanding. I play a lot and he accommodates my play, that’s why I like him.

What would you like your fans to know about you?

I love art, and I also like to make friends. I don’t lose friends.

Who are you most looking forward to working with?

I love Johnny Drille because he’s doing what I would do when I get into the music industry and I would love to work with him. He has the gospel side of him and he has another side to him that everyone is able to relate with, kind of like what Chike is doing. I’m more of the Timi Dakolo type of music person but in Johnny Drille’s style. I have songs for Nigeria, patriotic songs and also love songs, but I have gospel songs too, just like Timi Dakolo. I have a song coming out soon.

Who are you rooting for to win the show apart from yourself?

Akunna. Gosh, she sings. You can hear her calling, like ‘look at my face’. Also Atela. During rehearsals while he was singing I was literally shouting on stage and everyone was like, ‘calm down!’ His voice is just complete.

What are your plans after the show?
I want to teach music, I’d like to invest in doing that more. I'd also like to study music. I’ll be releasing songs too, though I don’t know which record label I’ll be with. We shall see!

Hottest Photo Reports
Catch up with all the political quotes from our politicians.
Advertise here
More Interviews
ModernGhana Links
I believe in women and our stories - Lydia Forson on why she plays strong women on screen
Peter Okoye: Raging, Raging Mr P
Naa Ashorkor - I’d like to see more films that speak to mental health challenges in young people
“Ghana Jollof is a gift at the most difficult time of my life” – Diji Aderogba
I’m a good cook - James Gardiner
Ghana Jollof is my first romantic role - Funnybone
I Have A Very Funny Side -Joselyn Dumas
Interview: What AfroZons Dubai Soundoff is - Sheila Okonji-Ashinze
I like the different versions of me that people have in their minds - Toke Makinwa
TOP STORIES