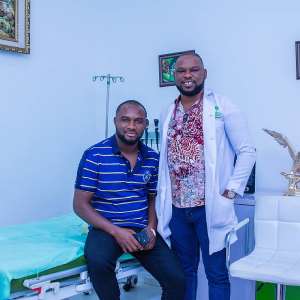 The loads of promises made by men and young boys towards ensuring one of the most delightful and amazing Valentine's Day experiences, especially with expensive gifts and premium outings for their spouses may have created more problems and challenges. In a 2minutes skit by Famous upcoming Comedian "Washington" and CEO of Peace Ambassador Agency uncovered some of the frivolous excuses made by several men to escape the Valentine's Day promises they had earlier promised.

In the few minutes skit, Comedian Washington acted the character of sick boyfriend who made several impossible Valentine's promises to his girlfriend, but later claimed to be hospitalised, so as to escape the pressure and demand for their Valentine presents. The doctor who admitted him was the character of Amb Kingsley Amafibe, whose efforts to manage the situation exploded when the girlfriend of his allegedly ill patient arrived at the hospital to demand their gifts from Comedian Washington, regardless of his acclaimed illness.

The humourous skit, which was designed to caution the challenges of unimaginable expectations and professed failure of promises has continue to attract loads of reactions both on social media and several responsive online media platforms. Most comments threw abuses to the Character of Comedian Washington, while other threw blames at his girlfriends for expecting so much from a guy, but instead become independent and solely reliant on their male friends or spouse.

According to reports, this is the first skit of Comedian Washington in his Comedy Career, though he performed excellently well and his fans continue to commend him for the step he has taken to make his career better and bigger. The Character of a Doctor on the short comedy skit, Amb. Kingsley Amafibe remains one of the most outstanding entertainment practitioner and showbiz Enterpreneur in Abuja.