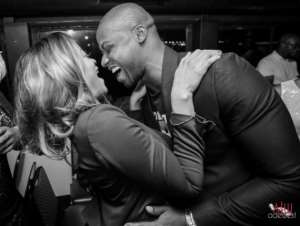 According to information getting to us, Damilola was delivered of a bouncing baby boy in the US.

Both actors acted in the popular television series, Tinsel, which is produced by MNET. Going by further reports reaching us, the child, mother and father are in good health conditions.

Damilola and Chris are reportedly yet to marry. It was also earlier reported in the year that both lovers wanted to legalise their relationship in April, but that the actress' pregnancy caused a change of mind.

Hottest Photo Reports
Catch up with all the political quotes from our politicians.
Advertise here
More Celebrity
ModernGhana Links
Angélique Kidjo, Psquare, Fireboy and others joins faces of Afrobeats campaign
Ini Edo Explains Why She had Her Daughter Through Surrogacy
Burna Boy In Good Company With Architectural Digest's Open Door Series
Nollywood Star, Usman Suleman, Is Optimistic About The Second Half Of 2021
Nigerian French-canadian Star, Tome Bags Prestigious Juno Award For Reggae Recording Of The Year At The 50th Juno Awards
British International Superstar, Naomi Campbell In Endsars Conversation With Femi Kuti, Isha Sesay, Yemi Adamolekun On 'no Filter With Naomi'.
MTV Base Celebrates The Leading Black Women In Music With Queens Of Base
Yvonne Jegede Makes Directorial Debut With “Separation” and “Wife Of The Year”
Yvonne Jegede: Lady In Red Attempts To Break The Internet With New Pictures
TOP STORIES