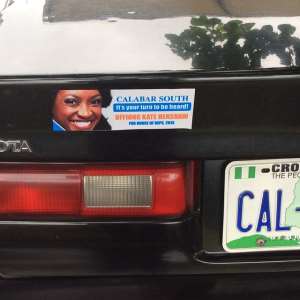 Just as other celebrities are coming out one after the other to declare their aspiration for 2015 politics, Nollywood actress and Kate Henshaw who declared her interest few weeks ago is already making progress with her campaign movement.

The actress will be contesting for a seat in her home town in Calabar, Cross Rivers in 2015 and surprisingly her campaign poster is already being spotted around.

One of her campaign poster was spotted in the Cross River state capital recently and it clearly means that some of the state indigenes already support her course.