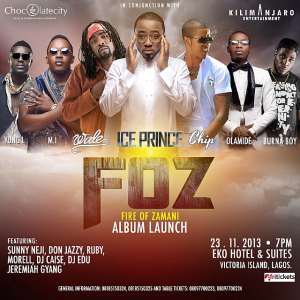 Multiple Grammy award winning rapper, Wale is set to perform in Nigeria for the first time at Ice Prince's Fire Of Zamani concert. The big-budget concert is part of activities to commemorate the release of his critically acclaimed second album.

His record label, Chocolate City also confirmed today that chart topping UK rapper, Chipmunk will be performing at the Fire Of Zamani concert along with Africa's biggest rapper, MI Abaga.

Wale and Chipmunk are two of the superstar international acts featured on Ice Prince's second album. The Nigerian American rapper Wale upped the ante on the track 'Tipsy' after Ice Prince introduces him brilliantly where he reassured Nigerians he is still part of them. Smooth and suave Chipmunk blends brilliantly with Ice Prince on 'Mercy' as both MCs silver-tongued talked about fine ladies with Ice name-dropping Yvonne Okoro.

Ice Prince will be hosting this explosive music concert on November 23 2013 at the prestigious Eko Hotel & Suites, Victoria Island, Lagos.

Fire Of Zamani was released on October 28, 2013 to much local and global acclaim. “Shout Out to my African Aboki, Ice Prince Zamani, the biggest African Artist for releasing the most anticipated album”, multiple award winning American rapper, Meek Mill tweeted at the Nigerian rap superstar.

“Never before have we seen something this fresh and up to date from Ice prince without losing the essence of what his music is all about”, comments Chocolate City Vice President, MI Abaga.

“You will experience me like never before! I will be performing with some of the masters in the game from Nigeria and beyond including Wale, Chipmunk and MI. I won't let out more than that for now,” says Panshak Zamani, popularly known as Ice Prince.

On November 11 2013, the deluxe F.O.Z CDs will be available for purchase from local retailers and leading online retail giant, konga.com. The deluxe CDs will include a special note from Ice Prince, song lyrics, posters and never before seen images of Ice Prince.

For further information or imagery on Fire Of Zamani, please contact:

We can't wait any longer – CLOGSAG to embark on nationwide s...
10 minutes ago

Nat Nuno Amarteifio, former Mayor of Accra to be buried on F...
10 minutes ago