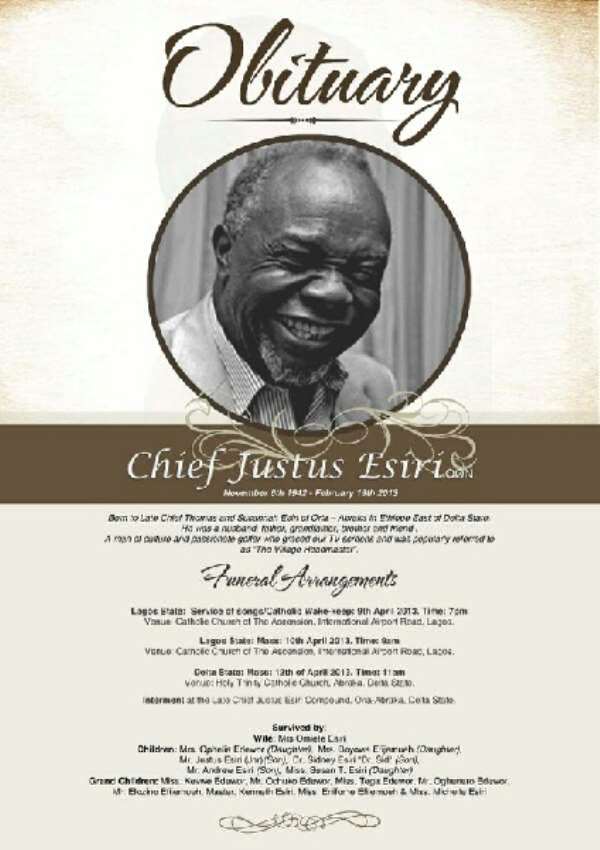 The obituary of late veteran actor, Justus Esiri has been released. As earlier reported by us, the journey to eternal home of the actor will still hold in April.

Justus Esiri will be buried in Delta State on April 12 after the Actors Guild of Nigeria (AGN) must have held a tribute and candlelight procession in his honour at the Ojez Restaurant in Lagos on Monday, April 8, 2013.

Justus Esiri died in February 2013. His death came shortly after the death of Goldie, who died on February 14.

Inside Politics: Political Quotes
Catch up with all the political quotes from our politicians.
Sponsored
More Touch Of Thoughts
Modern Ghana Links
US-based music icon, Derrick Ashong launches The Mic to promote African talents
Nigerian Makeup Artist DArtistebyawele Shares 7 Top General Beauty Tips Every Woman Must Know @DArtistebyawele
RMD’s Words to All The NUMBER-1’s in The World
Duncanmighty Advises People to Live According to the Pace of Their Clock
2017 Top 5 Most Productive Beauty Pageants
What Is Killing The Nigeria Pageant Industry??
So Tonto Dikeh Does Not How to Cook?
I Am Neither Proud Nor Arrogant- Joseph Benjamin
My Husband Is Home Alone;He Isn't Complaining- Toke Makinwa
Election Reports Quotes Dossiers
TOP STORIES

The 1986 Nobistor Affair meant to overthrow the Rawlings-led...
5 minutes ago

Check the dignitaries at Rawlings' funeral
32 minutes ago