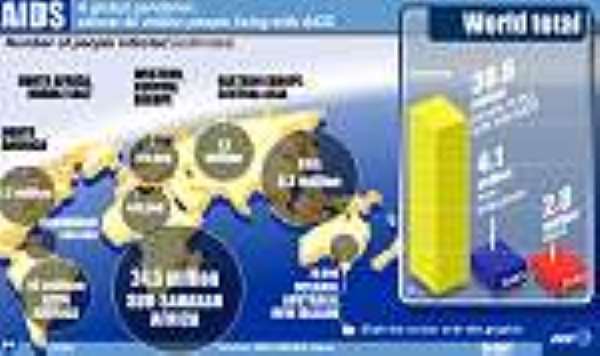 Negotiations over an updated version of the United Nations' "declaration of commitment" on AIDS are bogging down in battles over the language sensitivities of Islamic countries and the reluctance of the United States to have specific, very expensive global targets spelled out in detail.

According to numerous people in close contact with the negotiating teams, the declaration that will be presented to the General Assembly tomorrow may be far weaker than the one adopted in 2001. Though that declaration was not a binding document the way a treaty is, it is widely believed to have been a key factor in marshaling the world's energy and resources to address the needs of AIDS patients in the developing world.

Some participants said it will be ironic if the new declaration turns out to be vague in its goals and sanitized in its language, as an unprecedented number of activist groups and civil society organizations -- about 800 in all -- were invited to take part in preparing it and have been pressing for greater explicitness and accountability.

"We are seeing the U.N. system poised to take an enormous step backward," said Kim Nichols of the New York-based African Services Committee. "If we can't arrive at a unified set of global targets, then we're in deep, deep trouble."

The 2001 declaration laid out unambiguous targets, including specifying how much money should be spent on AIDS in needy countries in 2005, the percentage of pregnant women who should get drugs that prevent the transmission of the human immunodeficiency virus (HIV) to babies, and the percentage of people with advanced infection who should be on antiretroviral drugs.

Although most of the goals were not met, the target for total expenditure on AIDS in the developing world in 2005 -- $7 billion to $10 billion -- was. Last year, $8.3 billion was spent, with the United States providing more of the money than any other country.

UNAIDS, the United Nations' AIDS program, estimates that $20 billion to $23 billion a year will be needed by 2010. The United States now spends more on AIDS in the developing world than any other country and is considered likely to continue supporting the large number of people now getting antiretroviral therapy through the $15 billion President's Emergency Plan for AIDS Relief (PEPFAR) even after its five-year term expires.

People familiar with the negotiations here said the U.S. delegation fears that the United States will be held more accountable than other donors for funding shortfalls that may occur in the future if the targets are spelled out explicitly.

Civil society groups want a target of providing drugs by 2010 to 80 percent of people whose infection is advanced enough to require antiretroviral treatment and to 80 percent of infected pregnant women, as well as to all people who have both tuberculosis and AIDS.

None of those goals is mentioned in a draft of the declaration dated May 30. The United States is seeking to have the document "take note" of a goal of providing UNAIDS $20 billion to $23 billion by 2010, rather than having that need "recognized."

According to sources, the delegation also believes that individual countries will have greater "ownership" of their AIDS programs if they set their own targets instead of getting pre-specified ones. However, PEPFAR has explicit global targets for the number of people to be treated in the 15 countries where it currently underwrites prevention and treatment services. They include putting 2 million people on AIDS treatment, preventing 7 million new infections, and caring for 10 million people affected by the epidemic, including orphans.

At a news conference Wednesday, Peter Piot, executive director of UNAIDS, said he believes the declaration needs to have both financial and clinical targets, as well as a commitment to "universal access" to AIDS care by 2010, though he acknowledged that countries will define the latter goal differently.

Elsewhere in the draft, the Organization of the Islamic Conference -- a group of Islamic countries -- is seeking to remove the term "vulnerable groups." That phrase was the compromise reached in 2001 to avoid mentioning high-risk groups such as homosexuals, prostitutes and injected-drug users -- people whose behavior the Islamic countries did not want publicly mentioned.

There has been word-jockeying on gender issues, as well.

There is a groundswell this time to emphasize the links between HIV infection, gender inequality and violence against women. Though women make up about half the 39 million people living with AIDS, in sub-Saharan Africa they outnumber infected men three to two, according to UNAIDS.

"Cross-generational sex and transactional sex are adult crimes against children," Kenyan Musimbi Kanyoro of World YWCA told a gathering of civil society groups. "The punishment should be as severe as the crime."

The May 30 draft says the signers "must promote gender equality and empowerment of women and girls," but a group of African nations and the Islamic Conference want to delete girls from that phrase and substitute "promote and protect the rights of the girl child." Some observers see that as a subtle expression of patriarchy, which might be threatened if girls, too, were empowered.

Yesterday's plenary session of the General Assembly featured the first address by an acknowledged HIV-positive person in U.N. history. Khensani Mavasa of South Africa, who said she was also victim of sexual violence, stood before the delegates with a T-shirt emblazoned with "HIV Positive." She asked for an end to the disease's stigma