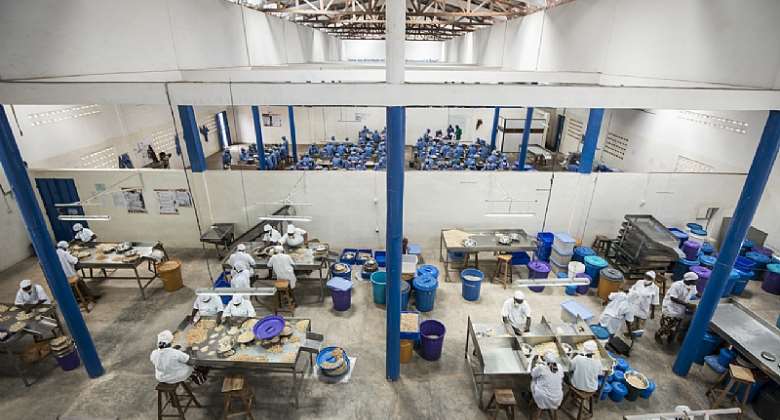 With more than three million cases across the globe as of April 29, 2020, the impact of COVID-19 has been far-reaching. Governments around the world are in a position never experienced before, as each attempt to discover the best strategies with which to address the pandemic. Several governments have had to issue support packages to businesses and citizens.

International businesses are one of the hardest hit by the spread of the coronavirus. For the cashew sector, the situation is no different as sector actors face diverse challenges. China, USA and European countries, which are the major cashew kernel markets, have closed their borders to travels to control the spread of the deadly virus, slowing down trade.

Consequently, cashew processing giants like Vietnam and India which are the major exporters of kernels to these countries have drastically reduced their processing volumes. Preventive measures such as social distancing and work shifts to reduce the number of workers at a time have resulted in reduced volumes and closure of some factories.

Because most of Vietnam and India-processed cashews are sourced from African countries, there has been falling demand for Raw Cashew nuts (RCN), and consequently, a drop in RCN prices.

Considering the slow down in trade activities, it can be assumed that there would be a significant reduction in the procurement of RCN from Ghana and neighbouring producing countries.

In Ghana, the implementation of preventive measures against the effects of COVID-19, such as the closure of all borders to entry, a ban on social gatherings, lockdowns in high-risk cities, and the introduction of work shifts for essential services have brought a sudden halt to international cashew trading. Since there is currently more RCN supply than demand, the price of RCN is dwindling. It has been reported that RCN prices have dropped by up to 50%; from about GHC 700 per bag to between GHC 350 and GHC 450 across the country’s producing areas .

Response of local processors to COVID-19

According to the Association of Cashew Processors Ghana (ACPG), three of the local factories are still engaged in processing activities, one has paused processing for equipment maintenance for a week and two are yet to begin 2020 production. Processors who supply the local consumer market have not seen a considerable drop in local demand for cashew nor sales by distributors on the local market.

Processors in Ghana normally observe strict food safety protocols that include regular washing of hands with soap under running water as well as the use of hand sanitizers. In response to the threat of COVID-19, workers continue to observe these protocols, with factory owners increasing the supply of sanitizers and water for frequent hand washing.

Those in the packaging unit sanitize their feet as well to prevent the spread of the virus.

Factories are also implementing social distancing by restricting employees present at a given time to 25. One roasting unit, which supplies nuts to the local market, has a maximum of 10 people at post at a time. One of the largest processing units in the country has closed for two weeks to protect their workers and community.

Local processors rely heavily on foreign trade, and although some processors are still able to export at the moment, this is looking less possible in the near future, should the spread of COVID-19 persist.

Measures adopted to prevent the spread of COVID-19 have forced producers to sell to the domestic market only. Given that RCN is priced based on quality, which diminishes the longer it is stored, it may not be prudent for producers to hoard stock in anticipation of better prices when the pandemic blows over. They are obliged to sell at current low prices. But do local processors have enough capacity to absorb the excess? Will the drop in prices give local processors a better opportunity to acquire RCN for production? It is possible that we witness a similar trend as in 2018 when RCN prices were at an all-time low, yet local processors were unable to take advantage of the situation due to inadequate capital.

With the possibility of impacts persisting long after COVID-19 has passed due to a possible global recession, will these developments culminate in a loss of farmers’ interest in cashew production in Ghana?

While questions persist, this season of unknowns presents an opportunity for Ghana’s cashew actors to discover new possibilities for the cashew value chain.

On the global demand side, worldwide consumption of cashew is stable, with a tendency toward increasing. The current stable demand is largely due to a combination of increased demand from the US and European consumers, and a decrease in demand from the Middle East. However, this decreased demand from the Middle East is due to supply chain disconnections as a result of COVID-19. The increased demand from US and European consumers (who constitute the world’s highest consumption) could be described as a potential silver lining of current events. With health as a major focus because of COVID-19, consumers’ demand for healthy nuts like cashew is rising. How can the African cashew sector take advantage of the presented opportunities?

Prioritising and investing in a robust local processing industry could shorten the supply chain to final consumers of cashews since an Africa-Europe or Africa- US shipping route is shorter than Africa-Asia- Europe/ USA.

In 2018, the cashew sector raked in about GHS 378m as a Non-Traditional Export crop for Ghana. The sector is projected to be a major earner in the agriculture sector for the country. Cashew has the potential to earn even more revenue for the country if given consistent strategic attention by the government and key stakeholders.

Value addition of kernels brings in at least three times more export revenue than exported raw cashew nuts. Beyond the nut, local raw cashew nut (RCN) processing also provides additional revenue streams through by-products such as the Cashew Nut Shell Liquid (CNSL) and fuel from cashew nut shells. CNSL is used extensively in the petroleum and paint production industries and the production of pesticides. Residual shells are also used as fuel for powering heavy industrial equipment. The cashew apple can be processed into fruit juice, wine, ethanol for industrial use, jam and other food products.

Ghana has the opportunity to take advantage of the opportunities using the Ghana Tree Crops Authority – which was passed into an Act in December 2019 and is planned to be operationalized this year – as a tool, in collaboration with other sector actors. Consistent strategic interventions can be developed and implemented to build a wholistic value chain, resilient as much as possible to another global shock to the levels of this current COVID-19 pandemic.