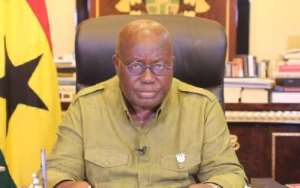 An octogenarian said, NHIA, was owing healthcare providers and yet, it had been able to raise GH¢250,000 to donate to the COVID-19 Trust Fund.

He said "if I have the power of the President, I would have asked the COVID-19 Trustees to reject the money and instead use it to settle the healthcare providers who are seriously affected due to the failure of the NHIA to pay them"

Mr Koe, a retired public health administrator told the GNA in an interview that it was a shame that NHIA could give so much donation when health facilities were suffering due to their indebtedness.

Whiles admitting that the COVID-19 Trust Fund was important, he noted that it was a misplaced priority on the part of the NHIA.

The octogenarian said the conduct of NHIA could be likened to "the outside gentility, home cry" cliché.

Mr Koe, urged the President to call the NHIA to order and if possible, direct that they take back the donation and use it to pay their service providers for the benefit of the general public.