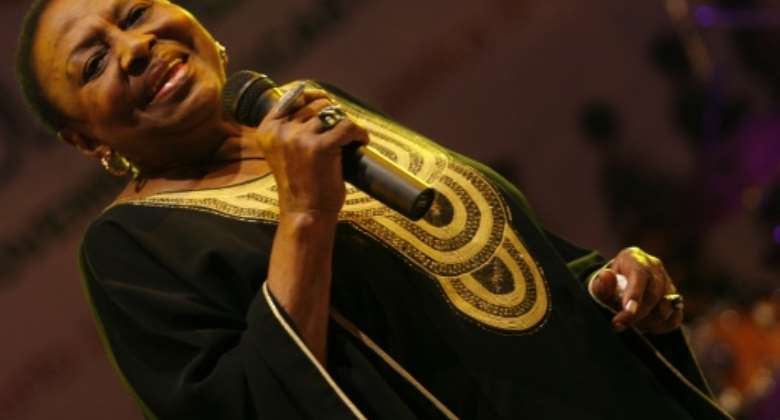 The lyrics of Miriam Makeba's 1967 classic which became synonymous with South Africa's liberation struggle have been re-written to encourage safe distancing and hand washing. By CARLO HERMANN (AFP/File)

The words of the 1967 song which became synonymous with South Africa's liberation struggle have been re-written to encourage safe distancing and hand washing.

"Once called the 'world's most defiantly joyful song'", it has been re-recorded, said UNICEF, "to spread information and hope in a time of coronavirus."

Benin-born Angelique Kidjo, who was mentored by Makeba, sings the re-recorded version, the UN children's fund said in a statement.

"Pata Pata" means "touch touch" in one of South Africa's vernaculars of Xhosa.

Some of the lines in the altered version go: "In this time of coronavirus it's not touch time.

"Everybody can help fight Covid-19. Stay at home and wait it out.

The original was one of Makeba's biggest hits alongside "The Click Song".

Known fondly as "Mama Africa", she died aged 76 in November 2008 after a performance in Italy.

She won a Grammy award for Best Folk Recording with US singer Harry Belafonte in 1965. But her music was outlawed in her homeland after she appeared in an anti-apartheid film.

Kidjo said the song reminded her of a friend, Afro-Jazz veteran Manu Dibango who died earlier this month after contracting coronavirus.

"Pata Pata has always been there for people at a time of struggle. I hope it helps once more."