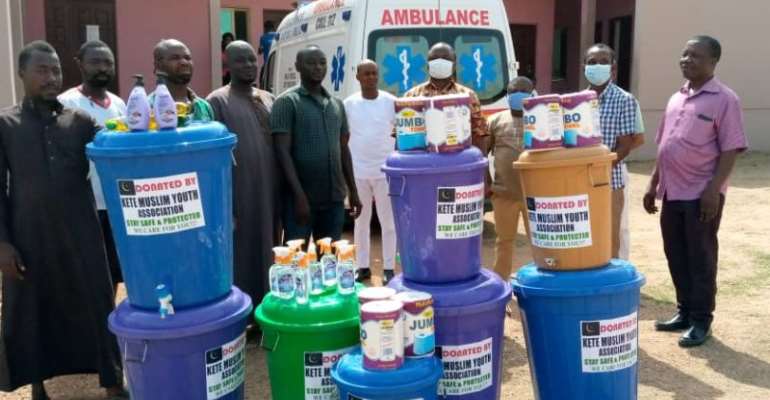 The Kete Muslim Youth Association has joined the COVID-19 fight with a donation of various items at Kete Krachi in the Oti Region.

The items donated worth GH¢5, 000.00 cedis include Veronica buckets, hand sanitizers, liquid soaps among others.

Haardi Abdul Rahman presented some of the items on behalf of the Association to the Omanhene of the Krachi Traditional Area, Krachiwura Nana Mprah Besemuna III.

Nana Mprah Besemunah III receiving the items commended the Association for their initiative and urged all his subjects to observe the laid down protocols to curb the spread of the pandemic.

Nana Besemuna III called for peace and unity among the people as the fight against the pandemic continues.

President of the Kete Muslim Youth Association in Accra, Shaafi Alhassan in an interview with First1News said, “Following the outbreak of pandemic the youth wants to be proactive in the prevention of the disease by contributing our quota.”

Shaafi Alhassan admonished the residents of Kete and its environs to adhere to the protocols given by health personnel by washing their hands with soap under running water and also stick to the social distancing protocol.

In an interview with First1News, Alhaji Ing. Aminu Abubakar a native, he stated the move is a great milestone towards peace in Kete.

“The reception given to the Muslim youth at the Traditional Council was great. We have responsibility as youth, using myself as example my uncle is the Krachiwura and my Father is the grandson of the famous Shehu Umar of Kete Krachi. There is the need to synchronize the Muslims of Kete and the Krachi like it used to be in the days of our grandparents.”

He also advise everybody to adhere to the protocols outline by the by Ministry of Health; social distancing, frequent hand wash and sanitizing.

Anti-gay bill : Tell foreign missions if they provoke us we'...
1 minute ago