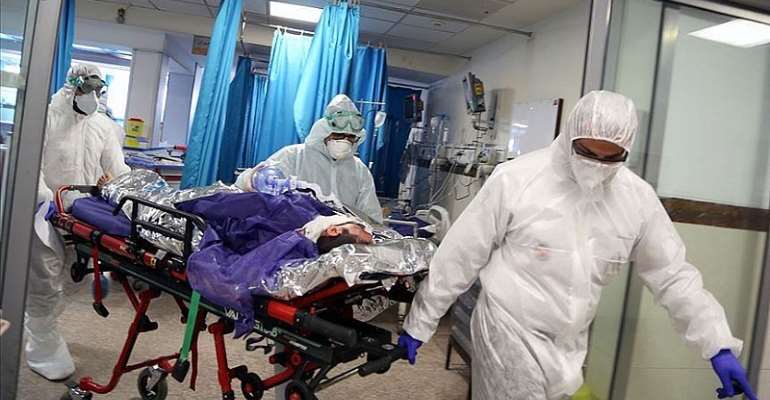 The bodies of people who succumb to the coronavirus disease (COVID-19) will not be released to the bereaved families for burial.

Rather, the state will take charge of the burial within the shortest possible time after the death, in consultation with the bereaved family.

This is because the infection is highly contagious and the virus remains active for a while after a victim passes on.

The closest family members of the deceased will be allowed to be present at the ceremony and observe from afar how the remains are interred.

In an interview with the Daily Graphic at his office in Accra, the Head of Pathology Department of the Greater Accra Regional Hospital, Dr Simon Naporo, explained that the state decided to take charge of managing the remains of people who lose the battle to the infection because it had been established medically that the virus lived on for a while even when the infected persons unfortunately passed away.

“Due to the fact that even after death the bodies remain contagious, they are not released to the families, neither are any parts of the body such as the hair strands, nails or anything on the bodies at the time of their death, retrieved.

“So unlike what happens in other situations, as soon as people die of COVID-19, their families are informed and almost immediately, the remains are interred in line with approved protocols for the highly contagious diseases,” he said.

A member of the COVID-19 management team, however, told the Daily Graphic that state officials consult the bereaved families in the management of the bodies according to their preference in line with cultural and belief systems.

Dr Naporo, who is also a Senior Specialist Pathologist at the hospital, advised Ghanaians to adhere to the preventive and precautionary protocols to avert a situation where the crisis would worsen and which could likely increase the number of deaths.

“Knowing how culturally important burials and funerals are to many of us, perhaps, the public must be told that individuals who lose their family members to COVID-19 will not be given the remains for private burial. This is done to minimise the risk of infecting others,” Dr Naporo explained.

Burial protocols
Dr Naporo explained that when such deaths occurred, per the World Health Organisation (WHO) standard protocols for such cases, special teams, tagged ‘burial teams’, were the ones mandated to handle the burials.

He said at the morgues, those who handle the bodies were given special training on that and immediately it happened, the families were informed and the bodies were taken to a separate storage room, decontaminated and prepared for the burial team to come for it for burial.

While some countries will allow post-mortems to be performed, in Ghana, post-mortems were not allowed and embalming the bodies were not encouraged, given that the whole idea was to limit the handling of the remains to the barest minimum level.

He said the remains were put in body bags and then interred at a designated area. While family members could provide coffins for the burial, the usual protocols of cleaning, specially dressing up and adorning the remains with ornaments as is usually done is not allowed.

However, he said a restricted number of family members could be allowed to the burial site to observe from afar and also say a prayer and present a wreath.

Burial team
The burial teams, the Senior Pathologist indicated, were made up of the Environmental Unit of Public Health units and the members consisted of people with health backgrounds who had been trained to handle bodies from contagious diseases.

He said though there was a national team that was trained to deal with the impact of the Ebola crisis, it was yet to be activated for the COVID-19 protocols.

Though it is the wish and prayer that the nation does not go through the disturbing experiences of other countries, Dr Naporo stressed the importance of activating the burial teams to ensure that nothing was left to chance in the fight against the infection.

“There is the need to have a properly organised burial team immediately. We’re praying against recording an explosion but we should also be prepared to avoid being taken unawares.

“In the absence of such teams, we could experience what is happening in Ecuador where people are unfortunately leaving their family members who have passed away on their streets for collection later because there are no trained teams for such special functions,” he stressed.

Ridge Hospital protocols
He said at Ridge Hospital, for instance, the officials at the pathology department, had put together a team made up of technical persons who had been trained on the standard protocols of the effective handling of bodies of COVID-19 related deaths.

Dr Naporo said apart from the hospital procuring an equipment used in removing such bodies to the designated place before they were taken away for burial, the trained team members had been taken through the details of the processes to get the remains prepared before being taken away by the burial team as outlined by world standard protocols.

Adhere to protocol
The Chief Pathologist said given what had gone on around the world, no country had the capacity or was prepared to deal with the high number of casualties and, therefore, reiterated the need for people to adhere to all the protocols being prescribed to stop the spread of the infection.

He said it was important to ensure that people were well informed to enable them to observe the safety and preventive protocols, since disregarding them could put everyone at risk and that could be disturbing for the health system.

Dr Naporo indicated that health personnel were concerned about the prospects of the country recording more positive cases as that could collapse the health system, given that even countries with the most advanced health systems were struggling to cope with their situations. He stressed that the only way to prevent Ghana from going through that experience was the adherence to the preventive protocols.

“It is important that people adhere to the precautionary and preventive protocols that have been prescribed. COVID-19 is real and it has a devastating impact.

“Unfortunately, people think it’s a joke and so they do things to put their own lives and that of others and their loved ones at risk of infection.

“Even countries with efficient health delivery systems are struggling to cope with the ugly impact of the infection, and that is why everyone in Ghana is concerned and praying that we don’t get to that point.

“People need to understand that our disregard for the directive to stay at home puts themselves, their families and everyone else at risk, and when it happens, the effect could be devastating

“Perhaps, they have not seen the ugly side of COVID-19 so they want to take things for granted. The message for such people is: If the unfortunate happens and the infection hits and lives are lost, there will be no chance for friends and loved ones to even bid you farewell,” Dr Naporo cautioned.

The 14-day exercise will form part of measures to relieve congestion at the hospital mortuary.

The Head of Public Affairs of the Police Hospital, Deputy Superintendent of Police (DSP) Mr Yaw Nketia-Yeboah, said generally bodies were not being released for public burials and funerals due to the ban on public gatherings.

“Nonetheless, families concerned who sign an undertaking to comply with the existing protocol and adhere to do a private burial are permitted to come for their bodies for the private burial. Such gathering should not be more than 25 people assembling and must also respect the existing protocols, including the social distancing. Such bodies are only to be taken in a casket and buried without any delays,” he stated in a statement.

Last month, the hospital said there were a total of 120 unidentified and unclaimed bodies to be buried in a mass grave.

The facility described the bodies as being made up of mostly paupers, unknown former patients, abandoned bodies, unidentified accident and crime victims.

It, therefore, urged the public to contact the Pathology Department of the Police Hospital for the identification of people who might have been missing for some time.