By Sebastian Smith, with Jing Xuan Teng in Wuhan and AFP bureaus 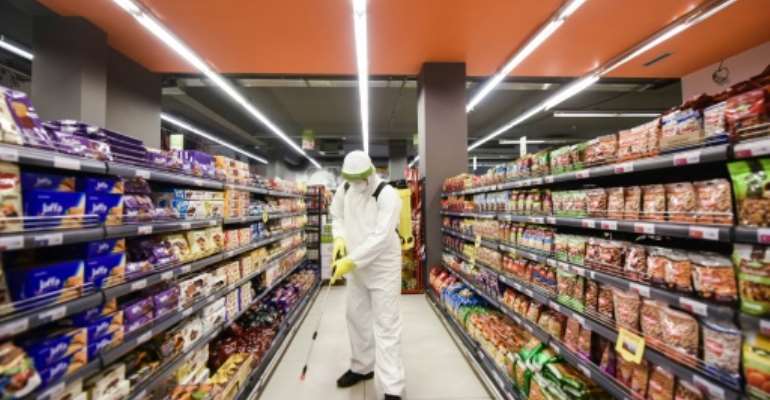 A worker disinfects the floor of a supermarket in Kosovo. By Armend NIMANI (AFP)

US President Donald Trump said Friday that China's coronavirus deaths were "far higher" than it has admitted after the toll in the city where the pandemic originated was revised up by 50 percent.

Global criticism is mounting against China over its management of the coronavirus outbreak, which has killed more than 145,000 people worldwide and hammered the global economy since it first emerged in the Chinese city of Wuhan last year.

More than half of humanity -- 4.5 billion people -- are confined to their homes as governments scramble to contain the virus's death march across the globe.

World leaders are now looking at when -- and how -- to ease widespread confinement measures to revive an economy battered by what the International Monetary Fund calls the "Great Lockdown".

Trump is eager to restart business in the world's biggest economy, while some hard-hit European nations are slowly creeping ahead on the path to normalcy, with some shops and schools starting to reopen.

The US leader announced this week a phased reopening of the United States -- one of his central preoccupations -- but on Friday turned his attention to China's death toll after Wuhan's city government added a further 1,290 deaths to the city's fatalities.

The revision brought the city's total to 3,869 after many dead were "mistakenly reported" or missed entirely, adding to growing global doubts over China's transparency.

A woman wearing a face mask and a plastic bag pulls a cart loaded with bags of recyclables through the streets of Lower Manhattan. By Johannes EISELE (AFP)

The revised death toll out of China on Friday was specific to the city of Wuhan, not the country as a whole. The United States currently has the most reported fatalities of any country in the world, with some 33,000 deaths.

Leaders in France and Britain have also questioned China's management of the crisis, and French President Emmanuel Macron said it would be "naive" to think Beijing had handled the pandemic well.

The virus is believed to have emerged in a wet market in Wuhan in December, but two US media outlets reported suspicions the virus accidentally slipped out of a sensitive Wuhan laboratory that studied bats.

Beijing, which has come under fire at home and abroad for downplaying the severity and scope of the outbreak, hit back earlier Friday, insisting there had been no cover-up.

Governments around the world are grappling with the question of when to reopen society, seeking a life-and-death balance between unfreezing stalled economies and preventing a second deadly coronavirus wave.

A healthcare worker attends to a coronavirus patient in intensive care at a Spanish hospital. By MIGUEL RIOPA (AFP)

While Trump declared Thursday that the time had come for the "next front in our war" with a phased reboot of the US economy, others took the opposite path -- Japan, Britain and Mexico all expanded current restrictions.

The president's approach was a step back from previous hopes for a sudden reopening however, and state governors were given the freedom to set their own plans to resume business.

US President Donald Trump, takes questions from journalist as he announces plans to reopen the US economy. By MANDEL NGAN (AFP)

Lightly affected states can open "literally tomorrow", said Trump, while others would receive White House "freedom and guidance" to achieve that at their own pace.

In New York state for example -- where more than 11,500 people have died -- Governor Andrew Cuomo extended a shutdown order until May 15.

In some of the world's most vulnerable economies, lockdown measures are starting to pinch.

Tobacco farmers in Zimbabwe fear a delayed start to the normally busy auction season, the lifeblood for thousands of growers in impoverished rural regions.

A woman grades cured tobacco leaves at a farm in Zimbabwe, where growers fear this seasons's sales will be hit by the pandemic. By Jekesai NJIKIZANA (AFP)

"We might have a delay (in selling) just because of the lockdown," he added.

Meanwhile, there were more signs the global economy is imploding.

China reported Friday its GDP shrank 6.8 percent in the first quarter, the first contraction since quarterly growth data started in the early 1990s.

In the US, another 5.2 million workers lost their jobs, bringing the total number of newly unemployed to a staggering 22 million since mid-March.

John Williams, a top Federal Reserve official, predicted it would take "a year or two" if not longer for the US to recover.

The virus could spark another "lost decade" in Latin America, the IMF warned, while experts cautioned that freezing debt for poor countries will not save many developing world economies.

Some European countries -- such as hard-hit Spain and Italy -- were embarking on a long road back to normality, with Venice residents strolling around quiet canals stripped of their usual throngs of tourists.

Officers patrol the streets of Venice, which saw some stringent lockdown measures eased this week. By ANDREA PATTARO (S fornasier/AFP)

Switzerland, Denmark and Finland were among those gradually re-opening shops and schools.

In Germany, the government declared its outbreak "under control" and said select small shops will be allowed to reopen Monday and some childre would return to school within weeks.

Germany's coronavirus deaths and infections have remained significantly below some of its worst-hit European neighbours, a fact which experts say is in part thanks to widespread testing.

COVID-19 and the immune system. By (AFP)

But Britain, which shut down later than continental Europe, extended its lockdown for at least three more weeks.

It announced close to 850 new deaths on Friday, a slight spike from previous days that had seen fatalities start to draw down.

And in Russia, recorded infections topped 32,000 as President Vladimir Putin warned that "the risks surrounding the epidemic's spread are still very high, not just in Moscow but in many other Russian regions".

Around the world, people have come up with creative ways to bring back some social connection to their upended lives.

In Rome an 18-year-old guitarist takes to his balcony every evening at sunset to play covers of Italian classics.

"We decided to lend a hand to Italians: a message of hope," Jacopo Mastrangelo told AFP from his patio.

"We are accustomed to always seeing Rome full, teeming with people. Now the grass is growing between the cobblestones, everything has been left abandoned, and we decided to help."