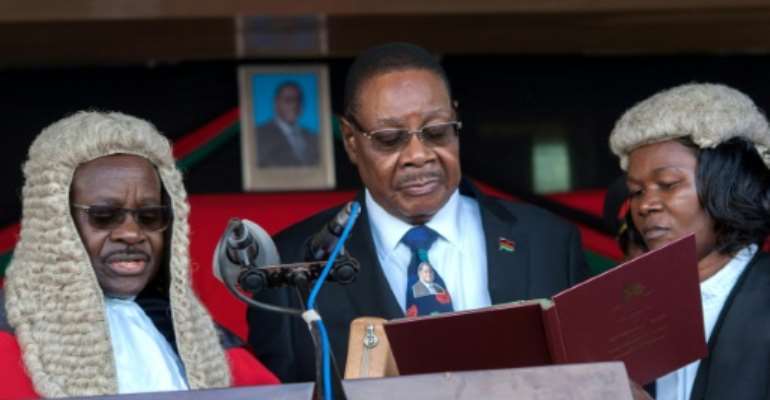 President Peter Mutharika (shown being sworn in May 28, 2019 by Chief Justice Andrew Nyirenda, L) is appealing after the Constitutional Court annulled the election and ordered a re-run, citing 'grave' and 'widespread' irregularities. By AMOS GUMULIRA (AFP/File)

Malawi's Supreme Court on Wednesday is to begin hearing an appeal by President Peter Mutharika against the re-run of an election in which he was returned to office last year.

The Constitutional Court in February annulled the results of the May 2019 poll and ordered a re-run, citing "grave" and "widespread" irregularities including the use of correction fluid on tally sheets.

Mutharika appealed against the landmark ruling, accusing the court of bias against him.

In his appeal papers, Mutharika said the judges had "erred in law" and asked the Supreme Court to reverse the judgement.

The president described the ruling as "a serious miscarriage of justice and an attack on the foundations of the country's democracy".

A new election has been set for July 2, although it could be delayed by the appeal and the coronavirus outbreak in the southern African country.

MEC chairwoman Jane Ansah said the court had overstepped its powers by ordering parliament to amend electoral laws ahead of a new vote.

Mutharika has refused to give his assent to the proposed amendments, notably one that requires a more than 50 percent majority to secure a win.

That threshold is a major sticking point for the incumbent, who had been declared winner with just 35.8 percent of the vote.

The MCP has since partnered with the United Transformation Movement (UTM) to maximise their chances of unseating the president.

The court ordered a fresh election within 150 days, as well as an investigation into the conduct of the electoral commission.

Both Mutharika and the MEC have made various attempts to delay the process.

Ansah claims that organising an election would require more time and has suggested October 28 as the new polling date.

Nyirenda argued that the lawyers would not have been physically present in court, as they were unable to travel to Malawi because of coronavirus travel bans.

The hiring of the South African lawyers -- who were set to charge 788,000 rand (around $43,000) for their services -- had caused uproar among Malawian lawyers and opposition parties.

The Malawi Law Society blasted the fees as "exorbitant" and questioned the rationale for choosing foreign over local lawyers.