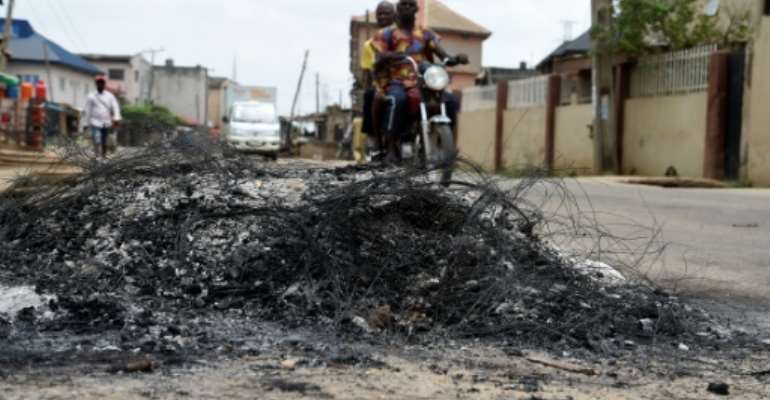 A motorcycle taxi in the district of Ojodu drives past the remains of a fire set to ward off gangs of robbers. By PIUS UTOMI EKPEI (AFP)

Bus driver Christian did not sleep at all last night after Nigeria's President Muhammadu Buhari ordered an extension to the lockdown in his sprawling home city Lagos to halt the coronavirus.

A few hours before the announcement on Monday evening, word spread that over a hundred youths from a criminal gang were swarming through his neighbourhood of Alimosho on a robbing spree.

"Everybody was scattering for their lives. We ran away and I locked myself inside the house," he told AFP, refusing to give his surname.

"When it was calmer, with the men on my street, we organised ourselves. We didn't sleep all night. We prepared weapons, collected knives, what we could find."

The authorities insist that extending the shutdown in Africa's biggest city to one month is vital to stop a virus that has so far caused 343 confirmed infections and 10 deaths in Nigeria.

But residents in the usually frenetic economic hub of 20 million, where more then half rely on daily earnings to survive, complain they have been left facing crippling economic hardship and rising crime.

'I was so scared'

In recent days, inhabitants in a string of districts across Lagos and neighbouring Ogun state have reported a surge in gang attacks.

"The criminals have been taking undue advantage of the lockdown to dispossess people of their valuables," community leader Mufu Gbadamosi told AFP.

He has organised people in his Agbado area of Lagos into groups to man checkpoints and screen people coming into their neighbourhood after dark. 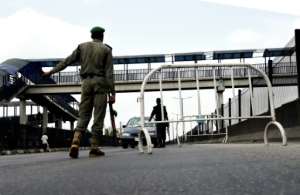 The city has deployed police to enforce the lockdown but people in some neighbourhoods say there has been a surge in crime. By PIUS UTOMI EKPEI (AFP)

"We shall continue to hold the night vigil until the end of the restriction," he told.

Local resident Dotun Alabi said it was the hunger and desperation caused by the lockdown that appeared to be pushing people into crime.

"When we arrested two boys, they told us that they took to robbery in order to find something to eat," he said.

Inhabitants in the overcrowded neighbourhoods of Lagos' poor -- where millions live squeezed together -- are no strangers to gang violence as criminals frequently fight for upper hand.

But Chioma Okoro, who has bunkered down in her home in the Agege district, said insecurity had grown in the past two weeks and ratcheted up dramatically over the weekend.

She had tried to go out with her husband to get supplies but dashed back when she saw a group of young men brandishing iron bars, machetes, and homemade firearms.

"I was hearing gunshots yesterday evening, I was so scared," she said.

'Going to get bad'

Nigeria's police says it has dispatched extra forces to deal with the trouble and arrested some 200 suspects.

"A special police squad headed by a deputy inspector general has deployed to ensure security of lives and properties in the affected communities," spokesman Bala Elkana told AFP.

But residents complain that there are not enough officers to protect them -- and insist the government needs to do more to support people financially.

"Millions of Nigerians observing the COVID-19 lockdown lack the food and income that their families need to survive," Anietie Ewang, Nigeria researcher at Human Rights Watch, said in a statement.

"The government needs to combine public health measures with efforts to prevent the pandemic from destroying the lives and livelihoods of society's poorest and most vulnerable people." 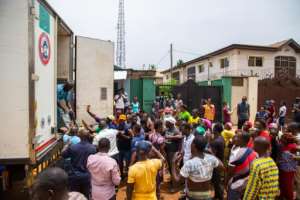 The authorities are handing out food to 200,000 poor households to try to ease the pain of lockdown. By Benson IBEABUCHI (AFP)

Lagos state authorities are handing out food to 200,000 households and President Buhari has pledged freezes on loan repayments and expanded welfare payments.

For Blessing Asaba those promises have meant nothing.

A few days ago she was robbed as she headed to buy produce to sell on her market stall at Obalende on Lagos Island.

"I have to pay school fees, I have to pay rent where I am staying -- where will I get the money from?" she asked as she stood by her pile of plantains.

"More than 100 million and something Nigerians are living like this -- and now there is robbery everywhere."

Student Alice Agbo was tending her mother's stall across the road, trying to earn enough from the customers still out on the streets to make ends meet.

"The lockdown is really causing poverty, hunger -- we don't have anything to eat," she said.

"It's not fair at all. Things are really going to get bad for people."