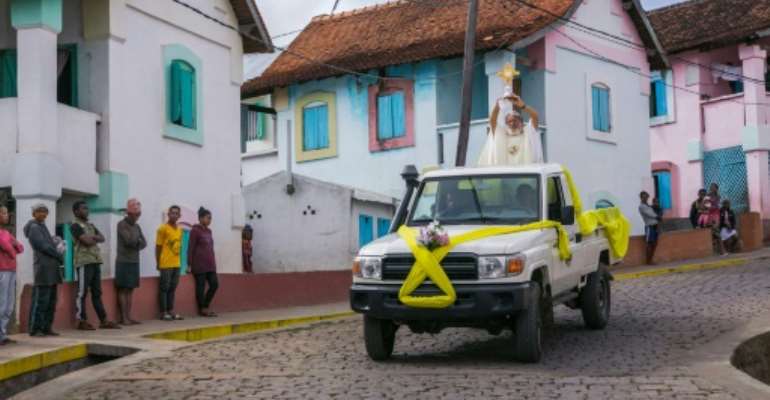 Father Pedro hopped on the back of a four-wheel drive and paraded through the town of Akamasoa. By RIJASOLO (AFP)

A coronavirus pandemic and a ban on public gatherings did not stop Madagascar's Father Pedro from celebrating an impromptu Easter mass and coming out to bless believers stuck at home... standing on the back of a car.

Madagascar's three main cities have been placed under lockdown until April 19 to slow the spread of COVID-19 on the Indian Ocean island nation, where 106 cases of the virus have been detected so far.

Despite the restrictions, a small group of worshippers in the town of Akamasoa outside the capital Antananarivo braved the lockdown to join Father Pedro in prayer.

The town, built on a landfill has become a home for more than 25,000 people, many of them waste-pickers.

"I am meant to be praying alone today," said the Argentinian Catholic priest who has helped lift thousands of Malagasy out of misery.

"No one has invited you here either," he told his unexpected audience. "But at this point it would not be fair to ask you to leave."

Peering timidly from behind their face masks, the faithful were allowed to stay on condition they maintained a three-metre distance between one another.

That rule was almost forgotten by Father Pedro, who naturally drew closer to his followers as he embarked on the sermon.

"I felt a force pushing me towards them," he explained. "I often find myself carried away by the spirit."

In a new-found wave of enthusiasm, Father Pedro then hopped on the back of a four-wheel drive and paraded through Akamasoa -- bringing back memories of Pope Francis who toured the city on his "popemobile" last September.

Several residents came out to meet Father Pedro's vehicle, kneeling down on the street in prayer.

"I came out to the people whilst respecting the (coronavirus) regulations to say that life has won, death has been defeated and that today we are no longer afraid," declared Father Pedro afterwards.

Not everyone was uplifted by the spectacle.

"There is already a coronavirus outbreak and on top of that we're not even allowed to hold mass in church."

Across the rest of the island, Malagasy who were not graced with Father Pedro's presence followed Easter celebrations over the radio or on television.