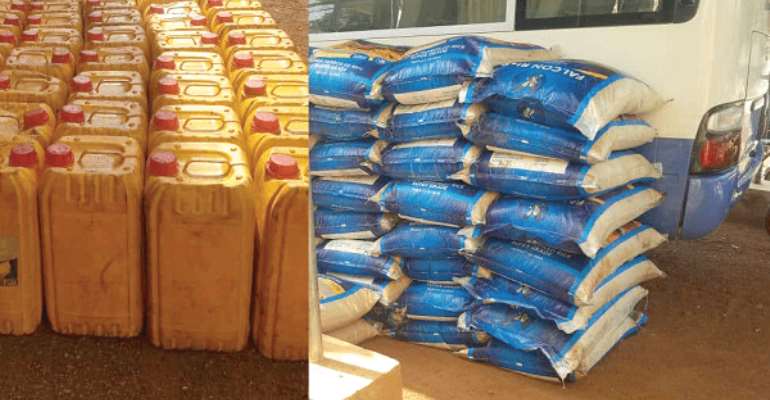 The Customs Division of the Ghana Revenue Authority (GRA) in Tamale has intercepted a truck carrying assorted goods suspected to have been smuggled from Sankasi in Togo into Tamale, the Northern Regional capital.

The goods comprise 441 bags (50 kg) of rice, 237 gallons of vegetable cooking oil and 15 drums of Sodium Cyanide used for welding.

Led by Assistant Revenue Officer (ARO) Mr George Forson, the customs officials intercepted the goods in the early hours of Sunday, April 5, 2020, upon a tip-off when the truck carrying the goods got to Nanton in the Northern Region.

Investigations
The goods were suspected to have been smuggled through an unapproved route, through Nakpanduri in the North East Region to Karaga in the Northern Region, where the first vehicle carrying the goods broke down.

The owners, who were already in the country before the closure of the borders, then hired another vehicle to cart the goods to Tamale and when the vehicle arrived in Nanton, it was arrested by the customs officers, who had laid ambush in the area.

Briefing
The Tamale Sector Commander of the Customs Division, Obor Binyam Yilinan II, who briefed the Daily Graphic, said the goods were intercepted by the revenue taskforce when the truck was spotted in Nanton.

He said the driver, upon interrogation, said he offloaded the goods from a vehicle that had broken down at Karaga after speaking to the owners of the goods on phone.

Obor Binyam said the first vehicle that was hired by the smugglers to bring the goods from Sankasi in Togo to Tamale broke down at Karaga and the owners of the goods then hired another vehicle, which was intercepted on its way to Tamale at Nanton by the taskforce.

Resolute
Obor Binyam cautioned that customs officials in the region were on high alert and would clamp down on recalcitrant smugglers.

Importers who had made up their minds to evade taxes by smuggling would be made to pay the duties on the goods, as well as penalties, he added.

Obor Binyam said the doors of the GRA were open to all importers in the region and urged people who needed help to approach the office for the necessary assistance to enable them to follow the country’s laws in cross-border trading.

CJ Order Courts To Sit On Holidays, Weekends On Cases Involv...
58 minutes ago