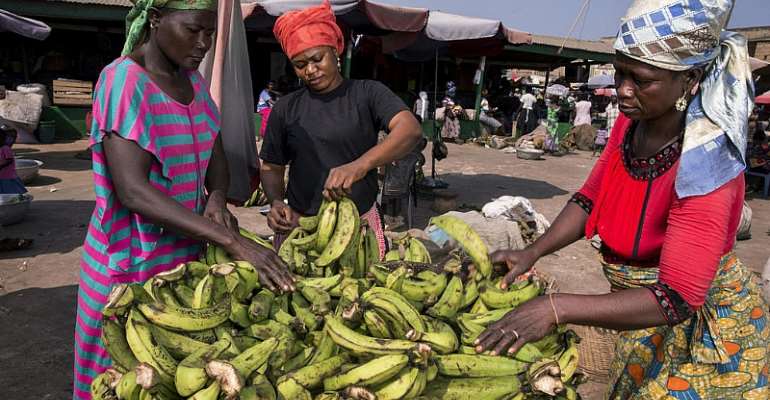 In an effort to stop the spread of Covid-19, African governments are implementing social distancing measures, especially in local markets, where many buy their daily fruit and vegetables. Market traders, experts and informal trading associations say it's causing problems for the urban poor and limiting their access to food.

“Because of the lockdown, people are not coming to buy and the street is so quiet. And you don't see anyone on the road. I was selling at the market for three days but no one is coming,” says Sandra, who sells produce at a market in the Ghanaian capital Accra.

“Today I decided that this week I wouldn't go in at all,” she told RFI by telephone from her home. She says she will have to throw out the tomatoes, peppers, okra and eggs she sells, as all will spoil before this coming Monday.

On Friday, 27 March, Ghana announced a two-week lockdown that would come into effect three days later —not enough time for Sandra or her market colleagues to sell their produce. Ghanaians can go out on to buy food, but many have stayed home.

“I'm worried about the money... I bought the things before.  If I knew it was going to happen, I would have waited and kept the money,” she says, complaining that she would not have stocked up on perishable goods otherwise.

Her situation is mirrored throughout the African continent for informal food traders, where people have not been given a lot of time to prepare. Those who had already bought stock have lost money.

Governments across the Africa have imposed varying measures in response to Covid-19. In Uganda, President Moweri Yuseveni said that petty traders could continue to work, but they would not be able to return home for 14 days, effectively forced to stay at the market or close by.

According to World Health Organization (WHO) Covid-19 guidelines, anyone who suspects they have the disease or have returned from a disease centre (Wuhan, China, European countries, US) should self-quarantine for 2 weeks. Museveni's rules could be considered a more creative interpretation of the idea.

The pandemic left many unprepared worldwide, but for those who live day-to-day as informal food traders and those who rely on these people, the lockdowns have come as a shock as governments attempt to impose WHO social isolation measures.

Governments who consult with traders groups and market queens (the heads of certain groups of sellers), will find trying to transition traders a bit easier, according to Danielle Resnick, a senior research fellow in the governance division at the International Food Policy Research Institute (IFPRI).

“Engaging with these groups - they hold a lot of local legitimacy and traders trust these local leaders - would be critical,” says Resnick.

She says that although markets look chaotic, they are quite well organised by the 'queens' and trade associations, who can facilitate more effective cooperation.

Space stalls out or alternate days
One possible solution in Ghana is to space out where each market person sits, so that the social distancing is respected. But this is seemingly physically impossible, says Dorcas Ansah, the Accra representative for Women in Informal Employment: Globalizing and Organizing, an international group that works with small traders.

“When you see a market so congested, who is supposed to move? The space is not there,” says Ansah, describing stalls crammed together side-by-side.

“For example, if each of us is working, and you ask me to shift, I'm shifting into somebody's space. That space is not mine. So who moves? Social distancing is very difficult,” she adds.

The Indian government's coronavirus lockdown provides another example of trying to keep local markets open. The measures include alternating market days, so vendors can close down the markets and clean them in between.

“There are big questions about the effectiveness of the response, but there were some options that they are using that could be considered,” says expert Resnick.

This is similar to one of the options the Ghanaian government is mulling over, says Ansah. But while trade associations are well-organised, the logistics when dealing with 15,000-20,000 people can be near impossible.

“Take a huge market like Makola, or other markets in Accra,” says Ansah. “If I come on Monday and you come on Tuesday, how do I know you came on Monday?” she says about the idea that market sellers could alternate so there would be less people in one small space.

Markets also sell shoes, cloth, and other items as well as food. “If I have an ID card, how do the security people know if I'm selling a shoe or food items?”

Some informal traders asked Ansah what they should do if the 'every-other-day' idea was implemented, as many do not have market ID cards.

Sellers pay a daily toll to sit and sell their wares and are given a receipt, she says, but unfortunately they usually throw it away.

“I suggested to them that it doesn't matter if it is an old or new receipt. Whatever you have, that is proof that you work in the markets,” she says.

“Improvise-- they have also done different training and we have given them t-shirts and certificates— they should use anything that shows their market identity,” she adds.

Elsewhere in West Africa
In the markets of Lagos, Nigeria, the local government is trying to follow the Indian example, allowing trade every 48 hours, leaving two days in between for disinfecting the marketplace, says Resnick.

“But they are requiring trade between 10am and 2pm every day; that runs counter to what we are seeing in India, where they are allowing the markets to be open long hours so that you don't have a crush of customers coming into the space all at once,” says Resnick.

“Time will tell what the appropriate response is, but the Lagosian government is claiming that shorter hours don't require traders to be exposed for a very long time during the day, but of course, during those four hours you could have quite an intense exposure because you could potentially have a ton of clients during those few hours,” she adds.

In Zimbabwe, over 90% of the population survives on the informal economy, according to Samuel Wadzai, executive director of Vendors Initiative for Social and Economic Transformation (VISET).

“It is so difficult to understand how people are going to survive this for 21 days without being able to go into the markets and trade and get money to survive…the majority of the informal traders are not allowed to do any business and this has affected our ability to eke out a living,” Wadzai told RFI, a week into the three-week lockdown.

Essential services such as supermarkets, pharmacies, and some transport providers were allowed to continue operating, while informal traders were left out. But when supermarkets started running out of fresh produce, the government had to allow farmers to bring their goods so that a few traders could come in to sell, says Wadzai.

“In Harare, they opened one of the biggest markets, called Mbare, but it's open to a limited number of traders, who work under the strict monitoring and supervision of the health department of the city council,” he says. Lusaka market in Harare has also reopened.

Wadzai's nationwide VISET group was called on by Harare city council representatives to select individuals who they feel have the capacity to run the markets at the moment.

“It's very important that the government allows informal traders associations to be part and parcel of the organising of the sector. And I think the lockdown has presented an opportunity for the government to do a relook on the way that they've been operating,” says Wadzai.

But while the Harare city council is trying to accommodate petty traders, in Mutare on the border with Mozambique, 13 traders who are VISET members out of 300 vendors had their produce confiscated by Zimbabwe Republic Police (ZRP) Officers and set on fire. It was meant to be sold at Sakubva Vegetable Market.

“It's absurd. You know, we can't really understand the reasoning,” says Wadzai. The government is looking for food support in order to feed Zimbabweans due to a severe drought and bad harvest last year, and some six million people, many in the rural areas, are facing starvation, he says.

VISET will be pursuing legal action to ensure that its members who suffered losses will be compensated.

“It seems like most problematic in governments who were quite adverse to trading, such as Rwanda, Lagos-not all of Nigeria, but Lagos- has been known for a long time to have a zero tolerance policy, particularly against street vendors and street hawkers, and Zimbabwe as well,” says IFPRI's Resnick.

Leading by example
“A lot of people have been supporters of the opposition in the urban centres, particularly traders,” she says of Zimbabwe, describing how party politics plays a hand in how governments regulate local markets.

VISET expects that the other municipalities across the country will emulate what Harare city council has done: to identify four-to-five spaces where they allow traders and farmers to come and sell their produce in conjunction with the health department.

Traders are particularly vulnerable not only because of the premium on space in markets, but traders touch paper money and coins all day, which can transmit the virus.

In Accra, Ansah says that there were handwashing stations in the market, but she saw no one using them. Not many people are wearing masks in the city either.

Covid-19 infections hit Ghana's middle class, those who travelled and were exposed, she says, adding that no trader has yet been afflicted. The middle classes are unlikely to visit the markets, preferring grocery stores.

Finally, says Ansah, “We are all praying that it doesn't get into the slums and the markets because if that happens, it will be very difficult for Ghana.”

Resignation Not Part Of Our Covid-19 Laws, Prosecute Carlos...
2 hours ago