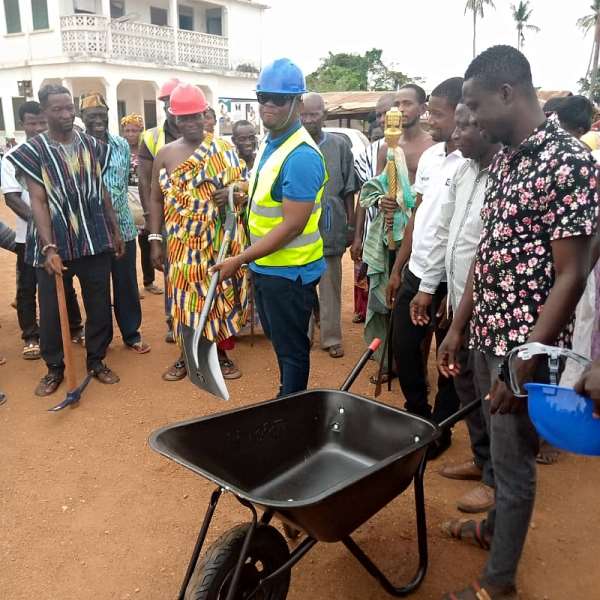 The District Chief Executive for Afadzato South in the Volta Region who doubles as the parliamentary candidate for the ruling New Patriotic Party, Hon. Etornam James Flolu held a sod-cutting ceremony on Saturday the 4th of April, 2020 to kickstart the construction of Laiti Roads.

The ceremony was graced by Paramount chief and elders of the Laiti Traditional Area, members of the Assembly, and party faithfuls of NPP.

Liati is noted for its beautiful tourist destinations, Mountain Afadza (Afadzato) the tallest mountain in Ghana, waterfall and the main route leading to Wli waterfall as well. But their road has remained in a deplorable state since the days of Agorkorli. Some scores of the community members claim they were told their road is not part of Ghana map and hence cannot be constructed, despite voting every year in Ghana.

According to the Paramount chief of Liati traditional area, this has been his dream for a very long time, but all efforts made by him has over the years proved futile. He could recall the number of travels he has embarked upon to ensure the construction of the road yet with no successful outcome.

The paramount chief addressing the ceremony made reference to the day he told Hon about the construction of the Laiti Roads when Hon Etornam came to introduce himself to him as the new DCE. According to the chief, though Hon. Etor promised him that the road will be constructed this very year yet he never believed until this moment.

Hon. James Flolu Etornam was astonished, to see a community having a lot of tourists' attraction sites but their roads being the poorest in the district. He has been dealing with the Sector Minister through the Regional Minister to justify the necessity for this very construction.

The majority of the people of Liati on hearing this news vowed to their ancestors as they promised to show their appreciation to his Excellency the President and to Hon Etornam through this year's elections. All the Assembly Members openly declared their full support to rally behind him, adding that it is not an elephant, an umbrella or a dove that will go to parliament but rather a human being. Therefore they are not going to consider party symbols or colours in the upcoming elections but rather personalities.