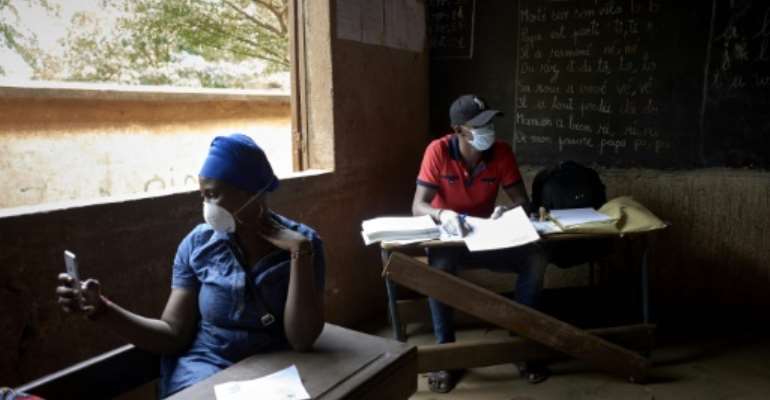 Electoral officials wore masks and gloves as a preventive measure against the spread of the coronavirus during Mali's parliamentary elections. By MICHELE CATTANI (AFP)

Turnout for Mali's parliamentary elections this week was 36 percent, officials said on Thursday, after voters dealt with threats of violence and the coronavirus pandemic.

Voters in the war-torn West African country cast their ballots for new MPs on Sunday in an election that was long delayed mostly because of security concerns.

"The participation rate still poses a challenge to our democracy," Bah said at a press conference in the capital Bamako.

Polling day was marked by several violent incidents in Mali's volatile north and centre, including the kidnap of officials.

Mali has struggled to contain a jihadist conflict that broke out in country's north in 2012 and then engulfed the centre. Thousands of soldiers and civilians have since been killed.

Last week's election followed the kidnap of leading opposition figure Soumaila Cisse -- a first in Mali for a politician of his rank.

But analysts said the election to the 147-seat parliament was critical to implementing reforms that could drag the former French colony out of its cycle of violence.

Provisional results indicate Cisse was elected in the first round, but also show a second round of voting will be needed in some districts where no candidate won a majority.

Preliminary results show many candidates who support President Ibrahim Boubacar Keita will likely face a second round of voting on April 19, according to an AFP tally.