Panic, confusion in DRC amid fears of virus explosion in Kinshasa 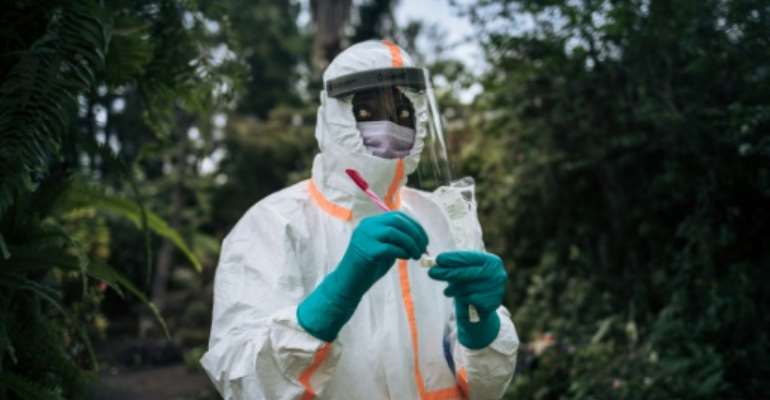 A health worker prepares equipment for a COVID-19 test in Goma in northeastern DRC. By ALEXIS HUGUET (AFP/File)

Lack of resources, a muddle over confinement and incipient panic are hobbling the response to coronavirus in DR Congo, fuelling fears especially for Kinshasa, one of Africa's largest and most chaotic cities.

Almost all of the infections in the vast central African nation have occurred in the capital, along with a handful in the east -- a deeply-troubled region hit by Ebola and militia attacks.

"The coming week will be the most difficult for Kinshasa. The numbers will quickly double or triple," Jean-Jacques Muyembe, who is leading DRC's fight against the pandemic, warned in an interview with Jeune Afrique magazine.

According to official figures released late Wednesday, there have been 123 confirmed cases, 11 of them deaths, in a nation of some 80 million people.

Kinshasa, which has been isolated from the rest of the country, has 118 cases but this is likely to be just the tip of the iceberg giving the paucity of testing.

"On average, 50 tests are carried out each day at the National Institute of Biomedical Research (INRB)," said a health official, speaking on condition of anonymity.

Five cases have been recorded in six days in the Democratic Republic of Congo's volatile east, destabilised by 25 years of rebel and militant attacks.

Two of them emerged in Goma, the capital of the eastern North Kivu province, which is officially due to declare an end to the Ebola outbreak on April 12 if no more cases of haemorrhagic fever emerge.

Kinshasa, home to at least 10 million people, was meant to go into lockdown on Saturday for four days under an announcement made unilaterally by the region's governor.

But officials delayed the measure after the announcement triggered fears of a rise in the prices of basic goods and the risk of unrest.

President Felix Tshisekedi, elected 15 months ago on a platform of change, faces a mountainous challenge in the form of the coronavirus pandemic. By LUDOVIC MARIN (AFP)

The national intelligence agency "warned the presidency of the threat of looting," an informed source said.

A day after the lockdown U-turn, President Felix Tshisekedi held an emergency meeting but there have been no announcements since.

"They want to decide on something that works. They can't afford to make mistakes," an observer said.

Two globally-renowned names have been enlisted in the campaign against coronavirus: Dr. Muyembe, who helped discover the Ebola virus in 1976, is national coordinator, while the 2018 Nobel Peace laureate, gynaecologist Denis Mukwege, is overseeing the response in the east.

Despite these reassuring appointments, preparations to deal with large numbers of coronavirus cases in Kinshasa are a mess, according to experts.

"The medical facilities are unequipped to take in sick people, apart from a hospital run by the Chinese," a health expert said.

There are only 65 ventilators in all of Kinshasa's hospitals, a researcher said. The INRB has no vehicles or fuel and foreign NGOs are pitching in to help, other sources said.

The problems have been experienced first-hand by some of Tshisekedi's entourage.

The president's special adviser, Vidiye Tshimanga, tested positive on March 23, after spending two days at home during which medical teams failed to arrive.

Churches and mosques were deserted after the government asked for places to worship to close for four weeks. By ALEXIS HUGUET (AFP)

Tshimanga, who was diagnosed with a mild forum of coronavirus and is on the mend, told AFP that when he went for a lung scan on Monday, he was met by a hospital official "who refused to let me get out of the ambulance."

One of his friends and a close aide of the president has meanwhile died, he told AFP.

"The medical teams were ill-informed and fearful of COVID-19 and hardly took care of him," Tshimanga said of his deceased colleague.

"I have heard of other cases like this," he said. "A kind of general panic has set in. COVID-19 patients are being left to one side without receiving care. There is a lack of information... something that we (the government) are going to have to tackle as soon as possible."