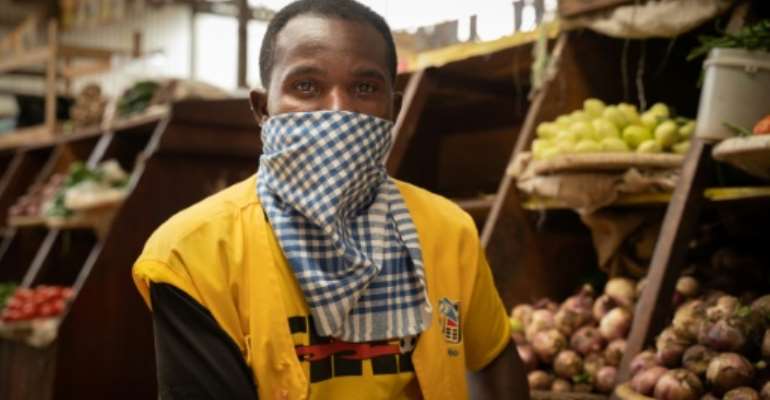 Masked: A phone credit salesman wears a dishcloth to cover his face at Kaveza market in Kigila. The country is in lockdown, and only essential stores are open.. By Simon Wohlfahrt (AFP)

Out of work, with prices soaring and police on the streets, life for many Rwandans has become immeasurably harder under coronavirus lockdown, and the pain looks only set to deepen.

Traders have warned of food shortages in the tiny landlocked nation, and parents are struggling to put food on the table, as the shutdown gutted the local economy on which lower-income Rwandans depend.

"To feed my family, I have to go hungry myself," said Regine Murengerantwari, a widower and mother of four in Kigali, whose income dried up when the new restrictions took effect on March 21.

As the coronavirus took hold, Rwanda swiftly imposed one of Africa's first total shutdowns, banning all "unnecessary movements" outside the home for two weeks to try and curb the spread of the disease.

Shops were closed, schools shuttered and public transport ground to a halt as the number of confirmed cases in Rwanda climbed to among the highest in mainland East Africa.

Other countries in the region have followed suit and with the number of cases still climbing -- now at 82 -- Kigali announced Wednesday the restrictions would remain in place another fortnight, until April 19.

Murengerantwari, a slum dweller who lost her income suddenly out of a job, does not know how her family will make it through.

Her meagre income disappeared overnight when the lockdown was imposed.

The 48-year-old had rented two small rooms in her home, one to a hairdresser and the other to a motorcycle taxi driver. When their businesses were banned, neither tenant could pay Murengerantwari her dues.

Fear: Regine Murengerantwari and her daughter. By Simon Wohlfahrt (AFP)

"I have no income at all, and no idea what the future holds now," she said.

The government has extended assistance to some of Rwanda's poorest, delivering food like maize, also called corn, and beans to roughly 20,000 of the country's most vulnerable.

"It was important to me, since my family has no source of income now," said Papias Gahungu, a motorcycle taxi driver, who received four kilograms (8.8 pounds) of foodstuffs under the government relief program.

But the need is great. Almost 40 percent of Rwandans live in poverty, according to the World Bank, and some like Murengerantwari said they missed out.

To compound the hardship, prices at local markets have soared amid fears of shortages and restrictions on truck movements slowing deliveries.

"Because delivery drivers are not bringing goods as normal, we have little choice but to raise prices. We are afraid of a scarcity of food," said Emiliene Musabyemariya, a trader at a market in Kigali, who said tomatoes were selling at nearly double the usual rate.

Some businesses are operating on the side. One alcohol retailer, who spoke on condition of anonymity, said he was doing a roaring trade despite the order for his shop to close.

"I have customers, and business is doing very well, surprisingly. I have to survive, but secretly... I deliver liquor to my customers' homes at night," the Kigali retailer said.

For those with cars and money, trips to buy goods from supermarkets are still permitted, as is ordering delivery food from restaurants via mobile app.

The streets of Kigali emptied after a two-week lockdown took effect on March 12. On Wednesday, the restrictions were extended for another fortnight, until April 19.. By Simon Wohlfahrt (AFP)

But the suspension of public transport has forced poor Rwandans to walk long distances to buy food and seek work. Some in Kigali have even journeyed on foot to markets beyond city lines to try and source affordable staples.

Tensions have boiled over, and the rules flouted in parts.

Some areas of Kigali remain busy, and police have manned checkpoints and warned of arrests for those not obeying the restrictions.

Last week, police arrested 12 people for refusing to return home when ordered to do so. They had "turned violent" when instructed to leave a trading area, police said.

In Nyanza district, southwest of Kigali, two men were shot dead by police who said they fired in self defence when the deceased refused to stop at a checkpoint and attacked the officers. An investigation is underway.

Now on the breadline, Murengerantwari prepares a single pot of porridge in the morning and scoops each of her four children -- who are normally fed at school -- just one cup to last them a day.

"I hope my children go back to school soon, because I have nothing for them here," she said.

Your dictatorial, political bloodshed will be responded, we ...
34 minutes ago