By Anna SMOLCHENKO and AFP bureaus 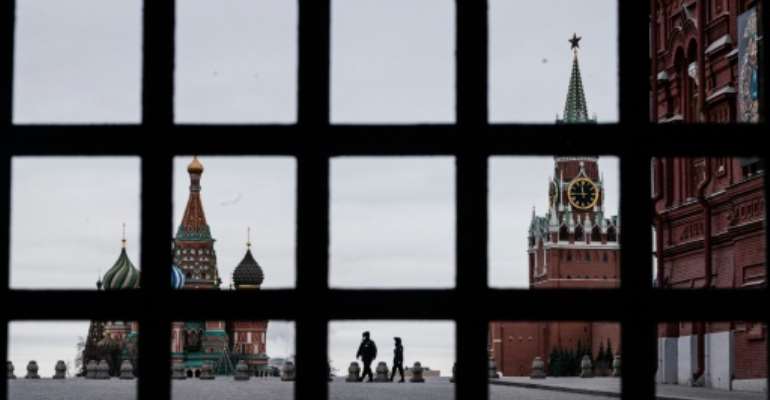 The streets of Moscow were deserted following the closure of all non-essential shops, including restaurants and cafes, but traffic was still seen on roads in the city centre. By Dimitar DILKOFF (AFP)

Russia's capital became the latest world city to impose a coronavirus lockdown on Monday as declared cases globally topped 700,000 and the planet braced for a drawn-out battle against the disease.

Worried governments are imposing fresh confinement measures in the face of a spiralling COVID-19 death toll that saw another 800 people die in the last 24 hours in Spain alone.

With leaders everywhere warning it will take months to restore normality, Africa's largest city Lagos was also preparing to join the more than one third of humanity ordered to stay in their homes.

Across the globe, desperate hospitals are filling up with patients despite governments imposing the most dramatic changes to the way people live since World War II in a bid to halt the deadly march of the disease.

The sweeping measures have wiped out millions of jobs, left economies teetering and rendered once-teeming cities eerily empty, yet there remains no real end in sight to the pandemic.

More than 33,000 people have died worldwide and the number of confirmed cases passed 700,000 on Monday, according to an AFP tally. More than 3.38 billion remain under lockdown.

In a sign that the world is in for a long haul, President Donald Trump on Sunday extended emergency virus restrictions until April 30 for the United States, which now has more confirmed cases than any other nation.

"Nothing would be worse than declaring victory before the victory is won," said Trump, as his top scientist Anthony Fauci warned up to 200,000 people could die there.

Spain has announced the death of another 812 people due to the coronavirus. By BALDESCA SAMPER (AFP)

A charity began setting up a field hospital in New York's Central Park to help take some of the strain.

"The hospitals all over the city are filling up and they need as much help as they can get," said Elliott Tenpenny, a doctor and team leader for Samaritan's Purse COVID-19 Response Team.

In Moscow, Europe's largest city with a population of 12 million, the streets were deserted following the closure of all non-essential shops, including restaurants and cafes, although some traffic was still seen on the roads.

The shutdown has seen huge chunks of the US economy grind to a halt. By Yuri DYACHYSHYN (AFP)

Citizens will only be allowed to leave their homes in a medical emergency, to travel to essential jobs and to shop for food or medicines. They will, however, be allowed to walk their dogs within a 100-metre radius of their homes.

President Vladimir Putin has declared a "non-working" week in Russia, which on Monday reported 302 new cases -- the biggest daily increase so far -- taking the total tally to 1,835 infections and nine deaths.

Coronavirus is tightening its grip on the rest of Europe, with Britain and hard-hit Italy warning at the weekend that measures to prevent the spread of the disease would be in place for months to come.

Spain, which has the world's second biggest death toll from the disease, announced another 812 virus deaths in 24 hours, although it was the first decline since Thursday.

"We have to free up beds, it's absolutely crucial," said Francois Brun, head of emergency services at a regional hospital in Metz.

The sheer scale of the economic impact continues to leave governments reeling, with German experts saying the virus would shrink output there this year by up to 5.4 percent.

The strains on society imposed by measures that might have seemed unimaginable just weeks ago are gradually starting to show.

Food banks in New York have been inundated with newcomers.

US President Donald Trump warned that the virus crisis would continue to get worse for some time. By JIM WATSON (AFP)

"We need the help now. This is crazy," said Lina Alba, 40, a single mother with five children who worked as a maid in a Manhattan hotel until it closed two weeks ago.

In Sicily, armed police began guarding entrances to supermarkets in Sicily after reports of looting.

In New Zealand, a website for people to report their neighbours for breaking coronavirus lockdown rules was so popular that it crashed soon after going live.

The crisis is also testing the balance between civil liberties and the need for restrictions to curb the disease.

Meanwhile the phenomenon of virus-stricken cruise ships continued with a liner entering the Panama Canal Sunday while it still searched for a port that will allow passengers to disembark.

"Four people are now dead, and that is on the head of all the people along the way who turned us away," US passenger Laura Gabaroni said after she became one of the healthy people allowed to leave the Zaandam liner.

Africa's biggest city, Lagos, was due to join the global stay-at-home from Monday, with Nigerian President Muhammadu Buhari ordering a two-week lockdown for its 20 million people.

The measures, in force from 2200 GMT, also apply to the capital Abuja.

Nigeria, Africa's most populous nation with some 190 million people, has so far registered just 97 confirmed infections and one death from COVID-19, but testing has been limited.

Zimbabwe also began enforcing a three-week lockdown, with most shops shut and all fights in and out of the country cancelled.

As in the rest of Africa and much of Asia, enforcing a total lockdown will be a mammoth challenge in a region where tens of millions live in poverty.