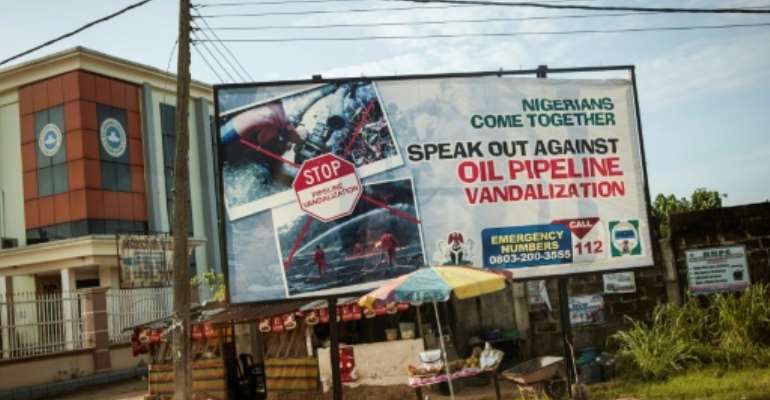 This photo taken on June 10, 2016 shows an advertising board concerning the oil pipeline vandalization in the City of Warri in Delta State. By Stefan Heunis (AFP/File)

Warri (Nigeria) (AFP) - Nigerian militants on Sunday blew up a state-run pipeline in the restive oil producing south, in the latest act of sabotage aimed against the strategic sector, a local official said.

"The pipeline popularly known as the Abura line was bombed at about 7:30 am on Sunday morning," Ughelli south council chairman Paul Etaiga told AFP. The pipeline is owned by the Nigerian Petroleum Development Company (NPDC) in Delta State.

Etaiga said he and security agents had visited the scene of the blast to assess the extent of damage.

Local resident Emekpor Emurotu said "we heard the blast this morning followed by a huge ball of fire from the pipeline."

Police said fire-fighters had put out the blaze.

There was no immediate claim of responsibility but militant group, the Niger Delta Greenland Justice Mandate, has consistently carried out attacks on oil pipelines belonging to the NPDC in the area.

Since the start of the year, several activist groups have intensified bombings of Nigeria's key oil and gas facilities, hurting government revenues at a time of a global fall in crude prices.

Oil-rich Nigeria depends on the oil sector for 70 percent of government revenue and 90 percent of foreign exchange.

The oil rebels have defied a government truce to halt the attacks.