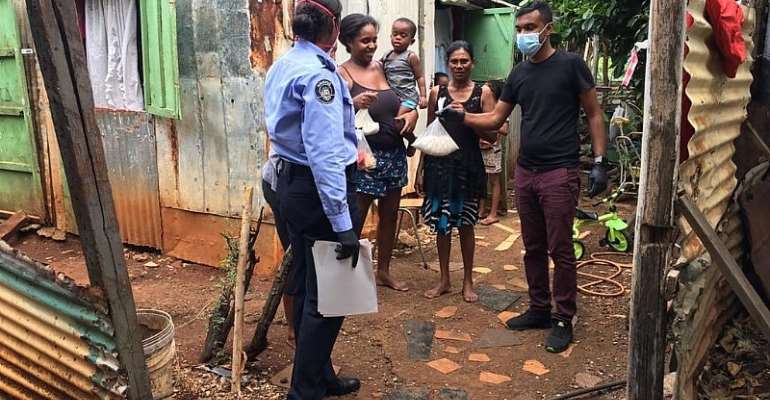 The Prime minister of Mauritius has announced an investigation into alleged cases of police brutality while the island remains under total lockdown to contain the rapid spread of Covid-19. This comes after two men, apprehended by the police, were subsequently hospitalised..

Pravind Jugnauth, the Prime minister of Mauritius said that "sanctions" will be taken against certain elements within the police force who are responsible for brutality towards the population.

The Mauritian deputy commissioner of police, Krishna Jhugroo, had earlier said that there would be complete transparency and no cover up in an ongoing investigation into recent acts of alleged police brutality as appeared in video footage widely circulating across the island.

Local media has reported that a policeman has been arrested today in relation with the case.

In a press conference on Wednesday, Commissioner of Police, Mario Nobin, announced that a probe is being carried out by the Central Criminal Investigation Department and that “75 per cent of the inquiry has already been accomplished.”

Commissioner Nobin specifically refered to one video, where two bloodied, handcuffed male suspects are being physically and verbally abused. According to several lawyers and journalists who have verified the footage, the two suspects “appeared to be in police custody”.

The video shows one suspect seated on the floor and threatened with a sparking taser gun after being splashed with water. The man shouted: “you will kill me.”

The same footage showed the other handcuffed suspect lying inert on the floor next to a trail of blood. He is being kicked while a male voice asks “you are dead?”

“We know where the incident happened, who the policemen are and who shared the videos,” Nobin declared. “The violence shown in the videos constitute a breach to human rights.”

Nobin said that sanctions will be taken against the perpetrators “in the coming hours” but activist Alain Ah Vee from Lalit party told RFI that they should have been suspended immediately.

“The lack of prompt, firm action from the police and the government is damaging to the image of the police force among the population,” he said. “It will be detrimental to the good elements who are doing their work diligently during this dire health crisis.”

According to local media, a police constable was attacked on Wednesday evening following the police brutality videos.

Lawyers mobilised
The videos have raised serious concerns among members of the legal profession.

Erickson Mooneapillay, a lawyer and director of the Mauritius branch of Human Rights Indian Ocean (DIS-MOI) NGO told RFI that the police officers in charge of the station should indeed have been suspended to avoid interference with evidence and witnesses.

“We are afraid that the whole inquiry might be a farce because there has been no arrest nor any suspension,” he said.

He expects the police officers, if they are arrested, to be charged with 'torture by a public official' which under section 78 of the Mauritian penal code carries a 10-year jail sentence.

“What we can see on the video is not just a case of police brutality, it is proper torture,” added the human rights lawyer.

“Taser guns are not part of the authorised police arsenal in Mauritius.”

An hour after seeing the images, barrister Yahia Nazroo gave a statement to the police on Wednesday 25 March to report what he has seen.

“I have invited the independent police complaints division to inquire into the incident.

“It is now up to the relevant authorities to bring to justice those who have abused their powers,” he declared.

What was the catalyst?
The two suspects, brothers Ricardo and Billy Saramandine from Cité Vallijee (southern suburb of the capital, Port-Louis), are currently in hospital; one has been admitted to the intensive care unit and the other one is under observation.

Their legal representative Mooneapillay condemned the excessive use of force by the police ahead of the arrests on Tuesday 24 March.

“There were four to five police vehicles with 25 to 30 men to arrest the two brothers,” he declared.

The whole incident was triggered, on Tuesday morning, when policemen patrolling Cité Vallijee, to ensure people stay indoors during the total lockdown, allegedly hit the elderly mother of the Saramandine brothers.

They retaliated with projectiles: a police car was damaged and two policemen injured.

Unprecedented brazeness
“What is unprecedented is that the videos were filmed by police officers who then shared them” said Mooneapillay.

“We gathered that much upon viewing them as well as from the comments made by the police commissioner on Wednesday.

"What is shocking is that it appears the officers in the video were gloating about what happened."

He fears that the policemen might get away with this offence because, in his experience, most of the time "the inquiry is inconclusive, evidence disappears, and witnesses fail to come forward".

“There cannot, however, be impunity for police officers who cross the boundaries,” he declared. "We are calling on the government to put an end to this prevailing sense of impunity.”

The leader of the opposition, Arvin Boolell, said that the matter will be raised in session as soon as Parliament resumes its activities.

“We were absolutely shocked, appalled and flabbergasted by what we saw and we had no choice but to take it up with the Prime minister, the Commissioner of police and his deputy,” he told RFI.

Boolell added that the majority of the police force was doing a good job while Mauritius is under strict coronavirus curfew but that the matter at hand only concerns a small group of officers using violence and abusive language towards Mauritian citizens.