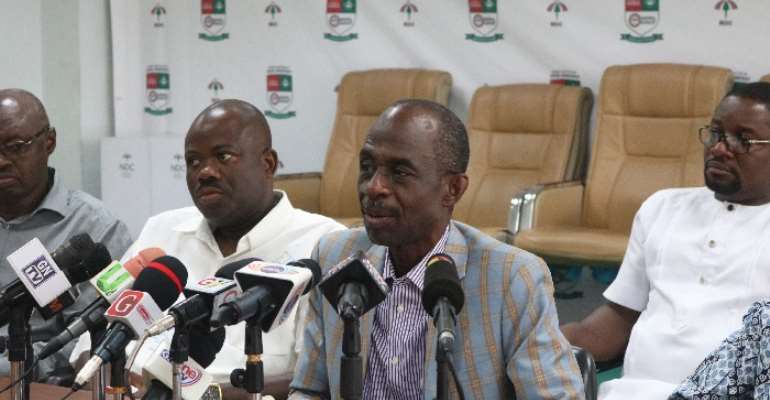 The opposition National Democratic Congress (NDC) has opted out of the Inter-Party Advisory Committee (IPAC) meeting scheduled for today, Wednesday.

The IPAC meeting will focus on the voter registration exercise, of which a number of political parties and other stakeholders have called for the exercise to be put on hold.

Due to the President's directive for limited people at social gatherings, the meeting is to be divided into two groups.

Also, representatives of political parties are to be reduced from three to one.

“We take note of your new arrangement for parties to be represented by just one (1) person for the IPAC meeting and the arrangements that the same meeting will be divided into two groups, because of the directives of the President on social gathering following the outbreak of the COVID-19 pandemic,” the NDC said in a statement signed by its General Secretary, Johnson Asiedu Nketia adding that it does not “see how any meaningful meeting can be held to achieve consensus on any matter.”

“The situation is even worse when the agreed representation of each party is reduced from three to one,” the NDC added.

Fifteen political parties have been invited by the EC to attend the IPAC meeting on the compilation of the new electoral register today.

In a notice to the parties, the EC indicated that there would be two separate IPAC meetings to be held today with the political parties divided into two groups.

The letter signed by the Deputy Chairman in charge of Corporate Affairs, Dr Bossman Eric Asare said the first group, which consists of NPP, NDC, CPP, PPP, PNC, LPG, GCPP, and GUM, would be held in the morning at 10 am.

The Group B category comprising EGLE, UFP, GFP, NDP, APC, UPP and PUP will have their turn in the afternoon at 2 pm.

It added that each of the political parties was expected to present one person for the meeting, explaining that the decision had come about due to the directive of the President for any social gathering not to exceed 25 people.

The NDC statement further indicated urged that “all IPAC meetings be suspended in compliance with the president’s directive” or “if the EC’s activities have been classified as essential activities and therefore exempted from the directives, then a bigger venue must be arranged for IPAC meetings where all three representatives of each party can be present with the sitting arrangements adequate enough to meet the social distance requirements as prescribed by the president’s directives”.

The legislative process towards a fresh voters' register commenced on Monday, March 17, 2020, as the EC asked Parliament to amend the relevant Constitutional Instrument (C.I.) 91 to reflect the changes in the proof of citizenship.

The first stage of the process was surmounted when the election management body asked Parliament to amend the germane C.I. to enable the national identification card and passport to be used as the only evidence of identification for a person who applies for registration as a voter.

The Majority Leader and Minister for Parliamentary Affairs, Osei Kyei-Mensah-Bonsu, laid the document before the House on behalf of the EC thus triggering the next stage of the legislative process.

Download below for the full details of the statement: