So our ‘transcendent Men of God’ didn’t envision the arrival of the pernicious coronavirus? 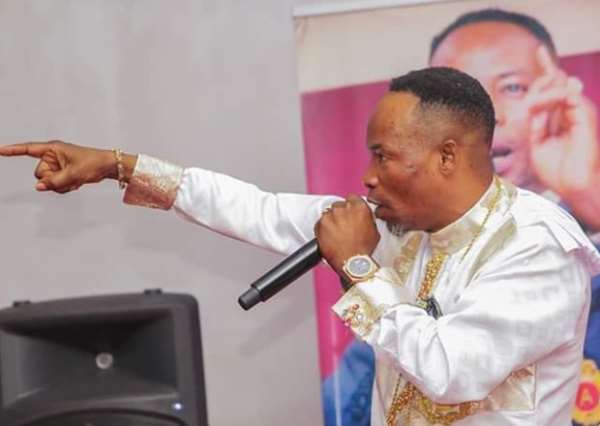 In these extraordinary days of social restiveness amid the untimely appearance of the mysterious and insidious coronavirus, I took time off my tight schedule and blissfully delved into the prophecy archives of our ‘Men of God’ with a view to ascertaining whether there had been earlier prophecies on coronavirus.

But to my utter disbelief, I did not come across any of such prophecies. ‘What a surprise’! I murmured in amazement.

So I thought I was falling from cloud nine or dreaming. But I was not. I was wide-awake. Wonders shall never end, they say.

Interestingly, however, a long-term confidant of mine concluded somewhat passionately that our ‘Men of God’ are rather experts in predicting issues about the two main political parties (NPP and NDC).

My pal then posed somewhat paradoxically: so do you believe that they are really ‘Men of God’?

I responded: 'I am well aware that it is written that false Prophets can sometimes perform Impressive Miracles to deceive their followers.'

All the same, I continued by referring my friend to Mat 24:24: ‘For there shall arise false Christs, and false prophets, and shall show great signs and wonders; insomuch that, if it were possible, they shall deceive the very elect’.

In fact, the Bible talks about false prophets and their self-expansiveness and the need for their followers to be on their guard.

The influx of the so-called Men of God and their revoltingly ugly activities are a cause for concern, so to speak.

How long should we endure the complexities of false prophets and their antipathetic interpretations of Christianity?

In Ghana today, no one can deny or ignore the fact that false prophets are blissfully at work, and command a multitude of truth seekers, many of whom lack knowledge, hence following the con-artists, who are probably resorting to black magic, albeit masquerading as “Men of God”.

Regrettably, the founders of the one-man churches have succeeded in hoodwinking, proselytizing and swindling unsuspecting truth seekers, who only want adulterated, more 'palatable' forms of Truth, watered down and compromised for convenience.

Whatever the case, I cannot for the life of me, get my head around how and why any authority on this planet would turn a blind eye to the complexities of false prophets and their antipathetic teachings of Christianity and societal norms.

In theory, the prudent line of action is for the authorities to review the repulsive activities of the false prophets and if possible circumscribe their activities accordingly.

More so it is incumbent on the truth seekers to be cautious in their attempts to finding the truth.

In my humble opinion, it is inconsequential on the part of individuals who are seeking to enter the Kingdom of God to veer from what the Bible really teaches and instead following the latter-day prophets of ” Nimokafrim and Ayetefrem” who will only lead them further into the “wilderness”.

To be quite honest, the way forward is to search for the truth in the Bible yourselves and avoid relying solely on charlatans who are only lulling you further into the wilderness.

We hear day in and day out on how some truth seekers are being swindled and often maltreated by the same “Men of God” who claim to be leading the truth seekers to “Heaven”.

Meanwhile the truth seekers are being “perished” for the lack of knowledge.

Jeremiah 14:14: “Then the LORD said unto me, the prophets prophesy lies in my name: I sent them not, neither have I commanded them, neither spake unto them: they prophesy unto you a false vision and divination, and a thing of nought, and the deceit of their heart.”

And if thou say in thine heart, how shall we know the word which the LORD hath not spoken? (Deuteronomy 18:21).

When a prophet speaketh in the name of the LORD, if the thing follow not, nor come to pass, that is the thing which the LORD hath not spoken, but the prophet hath spoken it presumptuously: thou shalt not be afraid of him (Deuteronomy 18:22).“

Undoubtedly, the so-called men of God are motivated by power and wealth and nothing else! For we can verify this assertion from Micah 3:9 [NIV] “Hear this, you leaders of the house of Jacob, you rulers of the house of Israel, who despise justice and distort all that is right”; Micah 3:10 [NIV] who build Zion with bloodshed, and Jerusalem with wickedness. Micah 3:11 [NIV] Her leaders judge for a bribe, her priests teach for a price, and her prophets tell fortunes for money. Yet they lean upon the LORD and say, "Is not the LORD among us? No disaster will come upon us."

Jeremiah 14:15: Therefore thus saith the LORD concerning the prophets that prophesy in my name, and I sent them not, yet they say, Sword and famine shall not be in this land; By sword and famine shall those prophets be consumed. Jer 14:16 And the people to whom they prophesy shall be cast out in the streets of Jerusalem because of the famine and the sword; and they shall have none to bury them, them, their wives, nor their sons, nor their daughters: for I will pour their wickedness upon them.

The so-called Men of God are claiming to be performing miracles in the name of Jehovah God to the amusement of their followers. But the question one may ask is: are those miracles really from God?

Mat 7:18 A good tree cannot bring forth evil fruit, neither can a corrupt tree bring forth good fruit.

Mat 7:19 Every tree that bringeth not forth good fruit is hewn down, and cast into the fire. Mat 7:20 Therefore by their fruits ye shall know them. Mat 7:21 Not every one that saith unto me, Lord, Lord, shall enter into the kingdom of heaven; but he that doeth the will of my Father which is in heaven. Mat 7:22 Many will say to me in that day, Lord, Lord, have we not prophesied in thy name? and in thy name have cast out devils? and in thy name done many wonderful works? Mat 7:23 And then will I profess unto them, I never knew you: depart from me, ye that work iniquity [lawlessness].

Nowadays, the people who prefer to be called ‘Men of God’ are all over the place and are very powerful and successful, but does this mean they have been actually blessed by Jehovah God?

Let us again look at the following verses from the new testament; Mathew 24:11; And many false prophets shall rise, and shall deceive many. Mat 24:12 And because iniquity [lawlessness] shall abound, the love of many shall wax cold.

2 Pet 2:1 [NIV] But there were also false prophets among the people, just as there will be false teachers among you. They will secretly introduce destructive heresies, even denying the sovereign Lord who bought them--bringing swift destruction on themselves. 2 Pet 2:2 [NIV] Many will follow their shameful ways and will bring the way of truth into disrepute. 2 Pet 2:3 [NIV] In their greed these teachers will exploit you with stories they have made up. Their condemnation has long been hanging over them, and their destruction has not been sleeping.

1 John 4:1 Beloved, believe not every spirit, but try the spirits whether they are of God: because many false prophets are gone out into the world.

Unfortunately, the vast majority of truth seekers are needlessly following miracles instead of the salvation, hence being fleeced by so-called men of God.

If we look at the following verses from the new testament, we will be able to differentiate the false prophets amongst us.

2 Tim 4:2 [NIV]; Preach the Word; be prepared in season and out of season; correct, rebuke and encourage--with great patience and careful instruction. 2 Tim 4:3 For the time will come when men will not put up with sound doctrine. Instead, to suit their own desires, they will gather around them a great number of teachers to say what their itching ears want to hear. 2 Tim 4:4 They will turn their ears away from the truth and turn aside to myths.

The truth seekers should also take note that true Prophets Are Always In agreement With Other Prophets Of God And Scripture: 1 Cor 14:32 And the spirits of the prophets are subject to the prophets. 1 Cor 14:37 If any man think himself to be a prophet, or spiritual, let him acknowledge that the things that I write unto you are the commandments of the Lord.

Mark 13:22 For false Christs and false prophets shall rise, and shall show signs and wonders, to seduce, if it were possible, even the elect.

Rev 13:11 And I beheld another beast coming up out of the earth; and he had two horns like a lamb, and he spake as a dragon. Rev 13:12 And he exerciseth all the power of the first beast before him, and causeth the earth and them which dwell therein to worship the first beast, whose deadly wound was healed. Rev 13:13 And he doeth great wonders, so that he maketh fire come down from heaven on the earth in the sight of men, Rev 13:14 And deceiveth them that dwell on the earth by the means of those miracles which he had power to do in the sight of the beast; saying to them that dwell on the earth, that they should make an image to the beast, which had the wound by a sword, and did live.

Revelation 16:13 And I saw three unclean spirits like frogs come out of the mouth of the dragon, and out of the mouth of the beast, and out of the mouth of the false prophet. Rev 16:14 For they are the spirits of devils, working miracles, which go forth unto the kings of the earth and of the whole world, to gather them to the battle of that great day of God Almighty. Rev 19:20 And the beast was taken, and with him the false prophet that wrought miracles before him, with which he deceived them that had received the mark of the beast, and them that worshipped his image. These both were cast alive into a lake of fire burning with brimstone.

One would expect that the Biblical teachings of the False Prophets will send clear warnings to the seekers of the truth, nonetheless the vast majority of truth seekers lack the requisite knowledge to appraise “non-facts”.

If the authorities do not come out with expedient measures to circumscribe the idiosyncratic activities of the False Prophets, the uncritical citizens will remain victims to the wolves in the sheep’s clothing.

I think it is about time the authorities took steps to halt the swindlers who are using the “Bible” to swindle their unsuspecting followers for their own expansiveness and leaving their victims to labour emotionally.