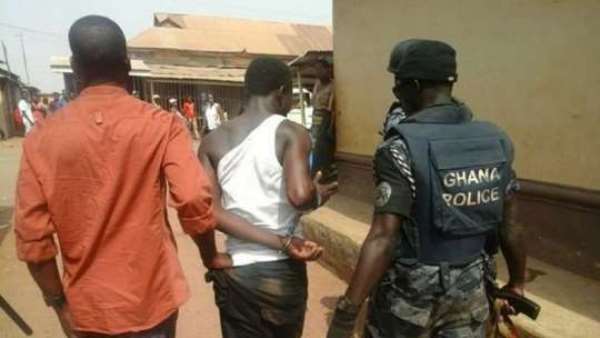 A 35-year old man, Stephen Tetteh, has been arrested by the Asesewa Police for illegally possessing firearm without authority and offensive conduct after he allegedly fired a gun at a National Identification Authority (NIA) registration center in the Easter Region.

The Eastern Regional Police Public Relations Officer, Deputy Superintendent of Police (DSP) Ebenezer Tetteh, said on Thursday, March 19, the suspect, who was wielding a gun, entered the registration center at Obeyemi, near Oterpkolu in the Upper-Manya Krobo District.

This occurred in the morning when officials had set up to start the day's work, he told the Ghana News Agency, in an interview, on Friday .

He said the suspect then ordered the officials to halt the exercise amidst firing of shots in the air, claiming that the registration exercise posed a danger to the officials and the citizenry who had queued to be registered in the wake of the COVID-19 outbreak in Ghana.

The Police, he said, got wind of the incident and quickly deployed a patrol team to the scene where the suspect was arrested and brought to the station for investigation.

Meanwhile, a number of individuals and organisations have appealed to the NIA to suspend the mass registration to prevent the spread of the disease.

Ghana has since Thursday, March 12, recorded 16 cases, with four of them having community origin.

The President has announced a ban on the gathering of people numbering more than 25, as part of measures to contain the disease.