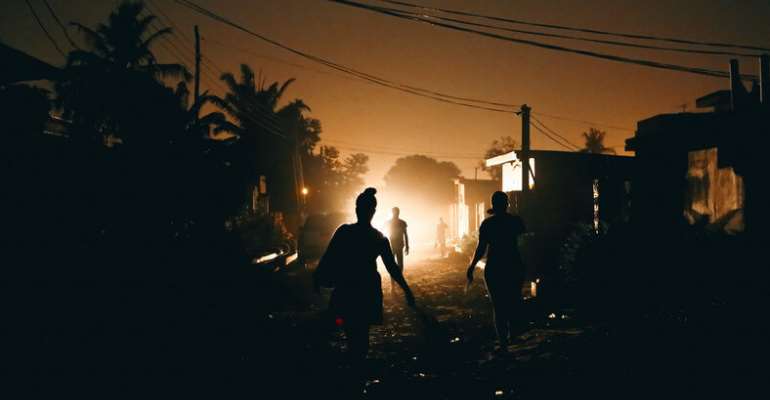 There is a widespread power outage in parts of Accra again.

The lights went off around 7 pm in some affected areas on Tuesday, March 17.

It is, however, unclear the reason for today’s power cut in parts of the capital.

This is happening at a time Ghanaians are staying indoors following government's ban on public gatherings against the outbreak of the novel coronavirus in the country.

The country has been experiencing widespread power cuts for about a week now with intermittent power outages almost every other night.

Earlier this week, the Ghana Grid Company Limited (GRIDCo) blamed the blackouts on a performance test on a new regulating and metering gas station in Tema.

Some affected residents around the Lapaz New Market described the current power situation as ‘shocking and frustrating’.

Some of the residents also called on Government to as a matter of urgency release a load-shedding time-table to help them effectively plan and organize their lives.

“We have been experiencing this blackout since last weekend, selling has become very difficult for us because we rely on our phone and when it goes off we struggle. Government should make public announcements on the issue,” a resident said.

“I work at Accra Newton and I must say it is frustrating to get home from work after a really long day and there is no light at home especially with all that’s happening with the coronavirus,” another resident told Citi News‘ Caleb Kudah.

The Ranking Member on Parliament's Mines and Energy Committee, Adam Mutawakilu, had bemoaned the surge in erratic power supply also known as dumsor in recent times.

According to him, power cuts reveal the deep-seated challenges in the energy sector that ought to be tackled.

Addressing the media, the Damango MP called for the release of a load shedding timetable.

“No gatherings mean that those who mostly go out for prayers at churches and mosques will now stay home. We expected that you as a concerned President will ensure that we will not experience dumsor but dumsor is at its peak for no apparent reason. Because we have enough installed capacity. He [the President] complains of excess capacity. This is the time we need excess capacity to come to play. Excess capacity is for situations like this where people stay more at home. If demand is increasing, you should be able to meet it. But the dumsor that we are facing is more of a disaster.”

He further accused the National Petroleum Authority of colluding with the Oil Marketing Companies (OMCs) to deprive Ghanaians of a proper reduction in fuel prices at the pumps.

Over the weekend the nation also witnessed a widespread power outage.

Come carry Mahama’s E-block away if you won’t open it and gi...
33 minutes ago