“Be Guided By National Interest To Report Corruption” - CHRAJ To Ghanaians 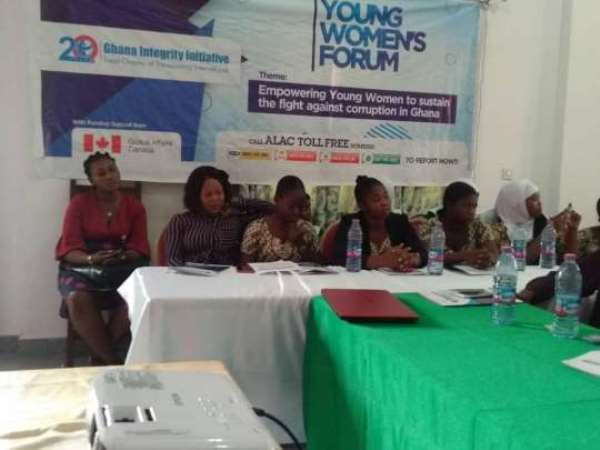 Citizens have been encouraged to be guided by the national interest to blow the whistle on wrongdoing in society to help reduce or stop crime in the country.

Mr Nantomah Adam Baani, Northern Regional Anti-corruption Focal Person at the Commission on Human Rights and Administrative Justice (CHRAJ), who gave the encouragement, also advised the citizenry to carefully select the institution to report or blow the whistle such that the report could be acted upon.

He was making a presentation on the Whistleblower's Act 2006, (Act 720) at a young women's forum held in Tamale on the theme: “Empowering Young Women to sustain the Fight against Corruption in Ghana”.

The event, which formed part of activities to celebrate this year's International Women's Day, was organised by the Ghana Integrity Initiative (GII) under the Integrity, Mobilisation, Participation, Accountability, Anti-corruption and Transparency project with funding support from the Global Affairs Canada through Transparency International.

Many of the populace do not take advantage of the Whistleblowers' Act to report acts of corruption or impropriety for various reasons including; fear of being victimised or attacked.

During the event, participants identified among others favouritism, examination malpractices and extortion as some of the corrupt practices affecting women within tertiary institutions.

Mr Baani spoke about the fear of victimisation and attacks, which prevented some people from blowing the whistle saying “if you feel that your life will be in danger, you will be accorded state protection,” encouraging them to report acts of impropriety in their communities because their identities would be kept confidential.

He explained that if reported corrupt acts were successfully prosecuted, the whistleblower was entitled to a reward from the state.

Mr Michael Boadi, Fundraising and Resource Mobilisation Manager at GII, who made a presentation on “Understanding the Linkage between Gender Equality and Anti-corruption,” called for anti-corruption laws to be gender-sensitive to aid the fight against corruption in the country.

Ms Hanifatu Hamza Gomda, a level 100 student studying Development Education at UDS said the forum helped her to know and understand some of the country's anti-corruption laws, which would guide her to contribute to fighting corruption in the country.