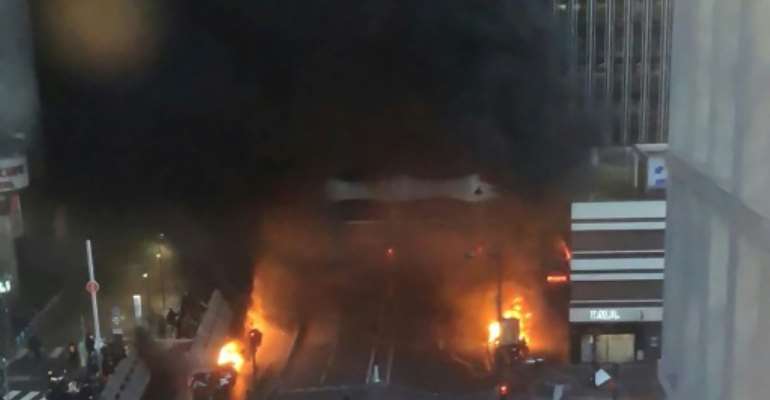 Police said 30 people were arrested and 54 fined for participating in a banned protest in Paris against a Congolese singer they accuse of having ties to the Kinshasa regime. By Julien Claus (AFP)

Paris police arrested dozens of protesters on Friday who burnt scooters and garbage bins outside a concert venue hosting a Congolese singer they accuse of giving a voice to the Kinshasa regime.

The nearby Gare de Lyon train station was partially evacuated amid the chaos and police warned Parisians to stay away as a thick, black column of smoke bellowed over the city centre.

Authorities had banned protests around the concert by singer Fally Ipupa at the AccorHotels Arena in Paris, but dozens turned out in anger nevertheless, facing off with the artist's fans and trading insults.

"With their music, they (the Congolese government) are bringing an entire people to their side while they slaughter and rape women and children," opponent Willy Dendebe told AFP at the scene.

"I have been here (in France) for 30 years because of them! Thirty years and we let them be here in France as if nothing has happened. So yes, we are angry!"

Police said 30 people were arrested and 54 fined for participating in a banned protest.

On Twitter, Paris police denounced the "unacceptable violence" and posted a video of what it said was "scandalous behaviour" by protesters shown wielding large roadworks barriers to prevent firefighters from getting to the flames.

The SCNF train service operator said the underground section of the Gare de Lyon was evacuated as a precautionary measure. Train traffic was severely disrupted.

Outside the station, AFP witnessed a dozen firetrucks at work amid the smouldering wrecks of about 30 vehicles, mainly scooters.

Congolese expats regularly speak out against artists from home who perform in France or Belgium, accusing them of being close to former DR Congo president Joseph Kabila and his successor Felix Tshisekedi.

Tshisekedi took office in January 2019, succeeding President Joseph Kabila, who stepped down after 18 iron-fisted years at the helm. Many see Tshisekedi as an extension of his predecessor.

Lwangi Bienvenu, an Ipupa fan who travelled from Belgium for the concert, observed the chaos from his hotel near the Gare de Lyon.

"It's a shame. He's Congolese, we should all be behind him," Bienvenu said of the singer.

"People will talk about the bad inside us. They put people in danger and they will now surely cancel the concert."

Paris has had its share of violent demonstrations in recent months with protesters ranging from the anti-government "yellow vests" movement to workers striking against pension reform setting fire to public property and smashing store windows during several marches, and clashing with police.