I'll Complete All My Abandoned Projects By This Gov't — Mahama Promises 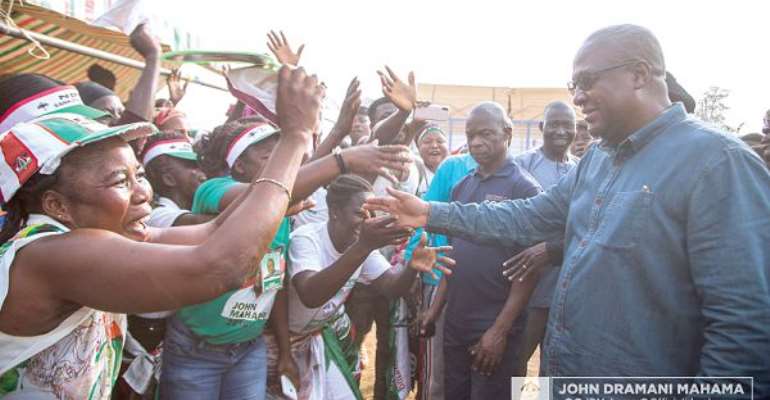 Former President John Mahama has assured the chiefs and people of Ahafo Region that he will complete all abandoned roads and projects when re-elected as President.

Sale of fertiliser
It said he described the decision to sell fertiliser to cocoa farmers as insensitive and affecting overall production.

President Mahama, it said, also challenged the media to visit the cocoa growing areas and cross-check the complaints of the farmers and chiefs about policy decisions that are affecting Ghana’s cocoa production, and also the abandoning of cocoa roads.

The statement said former President Mahama thanked the communities for their support, endorsement and acknowledgement of the National Democratic Congress’ (NDC’s) developmental projects.

At Nkrankrom in the Asutifi South Constituency, the statement said, the chief linguist, Nana Abeka, lamented that despite several visits to the district assembly to enquire about resumption of the project, there had not been any response.

“We were only told the project has been stopped because they were investigating the contract. It has been three years, and the road works, which started and brought joy to Nkrankrom, remain abandoned,” it quoted the linguist.

The statement said at Wromso, a representative of the chiefs, Nana Kwame Kumah, acknowledged President Mahama’s developmental vision, which had benefited the community greatly.

It said Nana Kumah appealed to the NDC leader to urgently construct their roads when he wins the 2020 election.