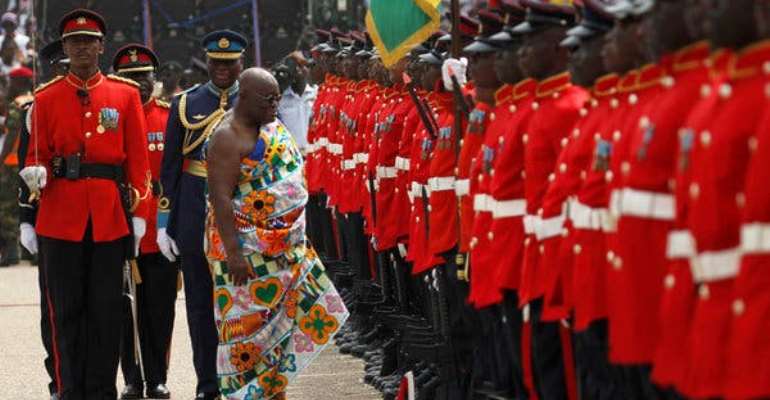 What happens to a country if the messiah is in fact, Mr. Judas Iscariot? Ghana, the former Gold Coast, is now full of corruption that the old ones are falling down from the closet and surely, before the December 2020 elections, more corruption scandals will emerge.

What Ghanaians must observe is since 2016, after NDC lost to NPP, John Mahama has never denied being corrupt. That means he has accepted it but Akufo Addo, the so-called messiah coming to eradicate corruption, is in fact, a thief among thieves, who wouldn't admit that he is corrupt.

It seems part of the large population of Ghana has a very short memory or even not interested in corruption scandals surrounding Akufo Addo. Actually, they more interested in pulling down John Mahama, which in fact has given Akufo Addo the upper hand to steal without any suspicion.

If those that hate Mahama are sincere, they must also begin to count or take into consideration of corruption scandals Akufo Addo has been involved so far, since he became the president of Ghana.

Kwesi Nyantakyi, the former President of the Ghana Football Association was disgraced in the biggest soccer corruption ever to hit Ghana but the truth is he wasn't alone. Akufo Addo was involved too but Ghanaians weren't interested in that part.

That statement made by Nyantakyi that he had Akufo Addo in his pocket, confirms it. As a matter of fact, just like the ministers of the former government under John Mahama, most of Akufo Addo ministers are thieves or even criminals.

We have the most stupid and weakest judiciary system in Ghana which those corrupt politicians have taken as an opportunity to steal government money with impunity. Most of them would have been in jail serving various sentences assuming Ghana is a developed country.

In any developed country, as soon as a politician is linked to any corruption scandal, he must be relieved of his post immediately. In Ghana, that politician will still keep his job or be transferred to a new post. Such malpractices don't build a nation, it rather retards the growth of a country's economy. These are some of the reasons Ghana's economy has never been in good shape.

The most painful part of political corruption in Ghana is that only the poor suffer, it doesn't affect the corrupt politicians, the reason they keep lying and deceiving the people continually. Akufo Addo is involved in many corruption scandals, including the Galamsey issues and the missing excavators. Because concerned Ghanaians are asking questions about his silence over the Galamsey issues and the missing excavators, forced him to come out yesterday, saying, "Galamsey Threat Is Great."

If a genuine investigation is done, Ghana will be shocked to know that Akufo Addo is involved in many corruption scandals in the country. I don't know many times I have to repeat this, Akufo Addo, there is no difference between you and John Mahama, when it comes to corruption, the only difference between the two is John Mahama is extremely intelligent than Akufo Addo, as simple as that.

He is just like his nephew, the moron who lives in America and always uses a false name to post stupid comments, "Joel Savage is a Fante and weed smoker." And he is always talking about my three kids who are intelligent than him. I am glad that some people have now recognized him, due to the e-mails I received recently. If his hate is stronger than me or my pen, he will never see my article on ModernGhana.

The biggest Cathedral is in the Vatican City in Rome, yet Italy is full of Mafia and pickpockets and for a president to have a burning ambition to undertake a Cathedral project in a country that economy is in a very bad shape, with thousands unemployed, is enough to tell you that our current president is not intelligent.

Time will tell when Ghanaians will know the true effects of lies, hate, and hypocrisy in politics. Ghanaian politicians are thieves, I feel so strong to say that without any regret.

Shatta Wale to spend another night in police cell; to face c...
42 minutes ago