Friction between DR Congo and Rwanda after dissident singer dies 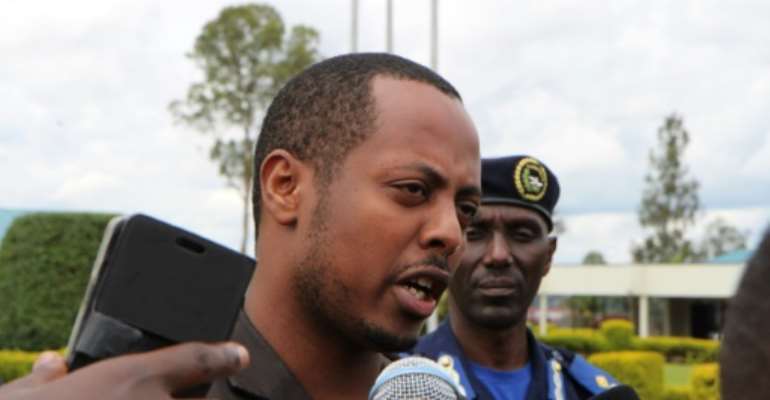 Rwandan musician Kizito Mihigo, pictured speaking to the media after being arrested in April 2014 on charges of threatening state security. By STEPHANIE AGLIETTI (AFP/File)

Rwanda has lashed out at the Democratic Republic of Congo, where the death of a dissident singer in Rwandan police custody has revived long-running criticism of Kigali.

Kizito Mihigo, a survivor of the Rwandan genocide whose songs angered the government of strongman President Paul Kagame, was found dead in a police cell in the capital on Monday, according to the Kigali authorities.

His death was announced three days after he was caught trying to flee the country.

The announcement revived smouldering anger in the DRC, where Rwanda is frequently accused of trying to interfere in Congo's volatile eastern border region and "balkanise" it.

Two Congolese lawmakers, Patrick Muyaya and Andre Claudel Lubaya, were among those who attacked the official account of suicide.

"After the so-called 'balkanisation,' another 'Made in DRC' conspiracy theory?" he wrote in a tweet.

"Sincerely, these marginal politicians should have the decency to be silent and take care of their own country.

"The unfortunate suicide of a young man in Rwanda does not concern them."

Congolese rights activists as well as Amnesty International have called for a full investigation into the singer's death.

Mihigo fell foul of the ruling RPF in 2013 after composing songs that questioned the government's tight control of the legacy of the 1994 genocide.

His music, once popular by ruling elites, was swiftly banned.

Two years later he was accused of terrorism and raising support for an opposition political movement and sentenced to 10 years in prison. He was released on presidental pardon in September 2018.

Kagame, who has been in power since 1994, has been accused of ruling with an iron fist, clamping down on all forms of dissent and jailing or exiling opposition politicians.

Human Rights Watch, among other rights watchdogs, has accused Kagame's regime of summary executions, unlawful arrest and detention and torture in custody.