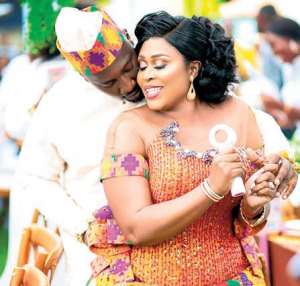 It was full of excitement and expression of true love when two leading members of the opposition National Democratic Congress (NDC) and the ruling New Patriotic Party (NPP) tied the knot at a colourful ceremony.

The couple – Chief Hamilton Biney, current Deputy National Organiser of the NDC, and Maame Afia Akoto, Deputy CEO of Microfinance and Small Loans Centre (MASLOC) who served as the party’s deputy communications director until her appointment – got married in the red-themed event that had the bigwigs of the country's two major political parties attending.

The ceremony attracted many well wishers who commended the couple for letting the love they have for each other lead them instead of their political inclination as the pre-wedding photos of the pair went viral on social media prior to the main event on Thursday.

But while Ghanaians are celebrating the beautiful union of the couple, some hardliners have gone overdrive questioning why the two should marry in the first place as if that is a taboo.

Some are even questioning their loyalty to their political parties in a cynical manner.

A member of the NDC, Stephen Atubiga, who was once jailed for contempt of the Supreme Court, described the marriage as a 'dangerous' enterprise, particularly because Mr. Biney holds an executive position in the NDC.

He argued that even though Mr. Biney has the right to marry whoever he wanted to, his problem with the marriage had to do with the position he occupies in the NDC as against the political leanings and role of his wife.

Chief Hamilton Biney, responding to apprehensions from some members of his party about his marriage to a political opponent, said he had no intention of mixing politics with love, urging his party people to remain calm as he would never disappoint them.

He also promised to discharge his duties without any external interference.

“I want to encourage the over 2,000 delegates who voted for me to become their national organizer that I won't disappoint them. I promise to work hard as they want me to. The only thing I have done now is to marry and nothing else,” he said.

Maame Afia Akoto also added, “When it comes to love issues, we shouldn't politicize it. I have heard people say things they don't know.”