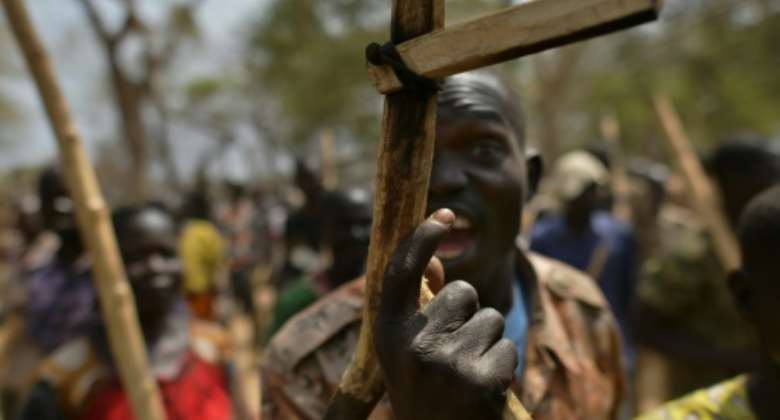 A soldier gestures with his wooden rifle at a UN-run programme to reconcile government troops with their former rebel enemies -- a key component of South Sudan's peace process. By TONY KARUMBA (AFP)

At a remote and spartan bush barracks in South Sudan, a motley collection of government soldiers and their rebel enemies chanted in unison, raising their mock wooden guns to the sky.

"South Sudan! Victory!" they cried out, as women ululated.

Troops from both sides of the battlefield broke into song and dance, sending up great clouds of dust as feet stomped in the dirt.

Away from the parade ground, however, optimism is in short supply.

Government soldiers and rebels are being brought together under an initiative to form a new, unified army under South Sudan's peace deal. By TONY KARUMBA (AFP)

This ragged band of war-weary troops is nowhere near ready to protect South Sudan, just days before a critical milestone in its tenuous peace process.

Under an accord meant to end six years of bloodshed, these adversaries were brought together in military camps for retraining to graduate as comrades in a new, unified army.

The foot soldiers, tired and beaten, seem eager to reconcile after a grinding war that's left 380,000 people dead, millions displaced and swathes of their young country in ruins.

"All we need is to unite the forces... Peace is around the corner," Edison Arkaingelo Musa, an opposition fighter, told AFP at the training site in Mapel, about 80 kilometres (50 miles) from Wau in the country's northwest.

But they are worryingly unprepared to take over security at a fragile moment in South Sudan, as a truce between its warring leaders is sorely tested.

A straw hut provides the quarters for this soldier. By TONY KARUMBA (AFP)

Formal training hasn't even begun, and the tens of millions of dollars needed for it has not materialised, derailing any chance of deploying on time.

Thousands of soldiers are cooped up in camps without adequate food and water.

UN envoys this month described conditions at the camps as "abhorrent" and reported that women living nearby had been raped.

The disarray comes as President Salva Kiir and the rebel leader, Riek Machar, face intense pressure to form a coalition government by February 22, a major step in the transition to peace.

But the old foes have already missed two deadlines, and the latest talks are gridlocked again.

South Sudan gained independence from Sudan in 2011, but two years later plunged into a civil war after rebel leaders fell out. By Sophie RAMIS (AFP)

Both men have violated past accords, raising fears this ceasefire may also not hold.

Merging their fighters into a truly national force, one not beholden to ethnic and political allegiances, was a precondition of the pact they signed in September 2018 that halted the carnage.

This time, it was agreed that an 83,000-strong unified army would safeguard against this, and the risk of discord between Kiir and Machar again splintering into brutal violence along ethnic lines.

Eighteen months later, though, only 36,000 fighters have been garrisoned for training, said Augostino Njoroge, the interim chairman of the RJMEC, which monitors the implementation of the peace process.

"Screening, selection and actual joint training of the forces is yet to start", the retired Kenyan general said in sobering remarks on Tuesday.

At Mapel, no drills or military exercises were observed by a visiting AFP team.

Hundreds of soldiers did attend a lecture, however, on rape and other war crimes led by a team from the UN Mission in South Sudan.

Latrines were not evident at the threadbare barracks, and men relieved themselves on trees. Sloping away from the camp was a hillside where the women and children of fighters slept.

"Sometimes there's no food at all," said rebel fighter Christo Gordon, as soldiers shared a pot of maize and beans, and passed around a jerrycan of murky drinking water.

Lack of funds is a huge problem: The quarters lack latrines and food is meagre. By TONY KARUMBA (AFP)

Many troops lacked uniforms, wearing football jerseys and missing footwear. One female soldier slung a wooden gun over one shoulder, and a baby over the other.

"Bring us money for shoes," said a passing government soldier. He at least had a set of tattered camouflage fatigues, but only one sandal.

'There will be peace'

Of the $100 million (92 million euros) promised by Kiir for unification only $40 million has been released so far, Ismail Wise, the special envoy on South Sudan from the East African regional bloc, IGAD, said this month.

Foreign donors who offered to plug shortfalls don't know how the money is being spent, said Andrew Clapham, from the UN Human Rights Council, after a fact-finding mission to South Sudan this month.

Handshake: President Salva Kiir (right) and his former vice president and rival, Riek Machar, pictured in Juba last October. The pair have until February 22 to form a coalition government scheduled under their 2018 peace accord.. By Alex McBride (AFP)

"We were extremely concerned to learn that there has been no response to these challenges by the government for months," he said, "which begs the question of how willing the government is to fulfil its obligations."

Analysts say Kiir has been reluctant to support a process he sees as benefiting his rivals, and that both parties are keeping fighters and guns in reserve.

Those sitting idle at Mapel pass the time singing songs about reconciliation, and looking to the future. Gordon is getting used to sharing his thatch hut with a former enemy.

"It is better than fighting," he said. "I think this is the end of conflict. There will be peace."